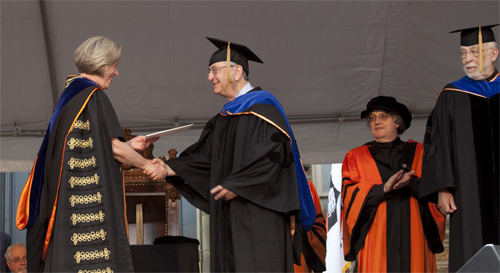 Erhan √áinlar, the Norman J. Sollenberger Professor in Engineering, received the President’s Award for Distinguished Teaching at Commencement on June 1. √áinlar joined the University faculty in 1985 and in 1999 served as the founding chair of the Department of Operations Research and Financial Engineering.

His undergraduate course “Probability and Stochastic Systems” is known as one of the most challenging classes at the University and a rite of passage for students in his department and throughout the engineering school.

One former undergraduate student who is now a professor at another university said √áinlar directly inspired her to follow in his footsteps. “It is said that the best teachers make a lasting impact on their students’ lives,” she wrote, “and it is clear to me that my relationship with Professor √áinlar has done just that, altering my trajectory from one that would have landed me on Wall Street to one that has led me to pursue a career as an academic and discover my love of research.”

Margaret Martonosi, a professor of electrical engineering, received the McGraw Center for Teaching and Learning Graduate Mentoring Award at the Graduate School’s hooding ceremony May 31.

Martonosi, who joined the Princeton faculty in 1994, focuses her research on computer architecture and the hardware-software interface, with particular attention to power-efficient systems and mobile computing.

In the field of processor architecture, she has done extensive work on power modeling and management, and on memory hierarchy performance and energy. Martonosi teaches a graduate course titled “Great Moments in Computing,” in which students learn about the discipline’s most fundamental topics by reading and discussing primary-source materials from scientists and industry pioneers including George Boole, Alan Turing, Maurice Wilkes and Gordon Moore.

In addition to her broad technical knowledge, several current and former students cited Martonosi’s passion for guiding them through their graduate studies as her greatest asset. 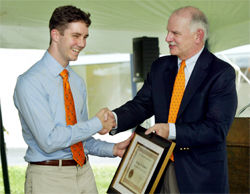 “Margaret’s mentorship shaped me both as a person and researcher,” said one former student. “Margaret has shown me how much being a good researcher extends beyond doing the technical work. She has always put a lot of emphasis on making sure all her students represent themselves and their work with the highest quality, and that we have significant and fruitful exposure to the world outside our lab. The effects of her mentorship still carry their signature in my work since graduation.”

Clancy Rowley, an associate professor of aerospace and mechanical engineering, received the Distinguished Teacher Award at the School of Engineering and Applied Science Class Day ceremony on May 28.