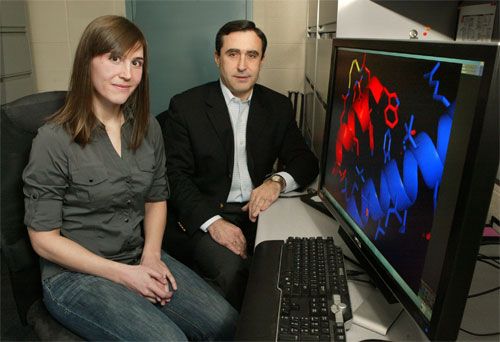 Using mathematical concepts, Princeton researchers have developed a method of discovering new drugs for a range of diseases by calculating which physical properties of biological molecules may predict their effectiveness as medicines.

The technique already has identified several potential new drugs that were shown to be effective for fighting strains of HIV by researchers at Johns Hopkins University.

“The power of this is that it’s a general method,” said Princeton chemical and biological engineering professor Christodoulos Floudas, who led the research team. “It has proven successful in finding potential peptides to fight HIV, but it should also be effective in searching for drugs for other diseases.”

Floudas, the Stephen C. Macaleer ’63 Professor in Engineering and Applied Science, and Princeton engineering doctoral student Meghan Bellows-Peterson collaborated on the study with researchers at the Johns Hopkins University School of Medicine. Their findings were reported in the Nov. 17, 2010, issue of Biophysical Journal.

The researchers’ technique combines concepts from optimization theory, a field of mathematics that focuses on calculating the best option among a number of choices, with those of computational biology, which combines mathematics, statistics and computer science for biology research.

In the case of HIV, the challenge for the Princeton team was to find peptides — the small chains of biologically active amino acids that are the basic building blocks of proteins — that could stop the virus from infecting human cells.

“The Princeton researchers have a very sophisticated way of selecting peptides that will fit a particular binding site on an HIV virus,” said collaborator Robert Siliciano, a professor of medicine at Johns Hopkins and a 1974 Princeton graduate, who specializes in the treatment of HIV. “It narrows the possibilities, and may reduce the amount of time and resources it takes to find new drugs.”

Fuzeon (enfuvirtide), is a peptidic drug commonly given to HIV patients for whom first-line HIV medications have not proven fully effective. Fuzeon costs nearly $20,000 per year, and patients must take it regularly due to its short period of effectiveness in the body. The researchers hoped to find an alternative to Fuzeon by discovering new peptides that would be cheaper to produce and allow patients to take fewer and smaller doses.

Fuzeon is thought to inhibit HIV by attaching to the virus and disabling a structure used to penetrate the protective membrane of human cells.

“The actual mechanism for entering cells is still uncertain, but there is a lot of evidence that points to this certain structure on the virus,” Bellows-Peterson said. “We used the available data on the proteins that form the structure to help us predict what kind of drug might be effective against the virus.”

The researchers reasoned that a shorter peptide — Fuzeon is 36 amino acids long– would be cheaper to produce and would last longer in the body, since shorter molecules are less susceptible to breakdown. Such formulations also might allow for drugs that could be taken as a pill instead of an injection.

The researchers’ biological sleuthing focused on the physical relationship between peptides and the HIV protein structure that Fuzeon targets. The team developed a formula based on statistical thermodynamics to predict whether a given peptide, based on its sequence of amino acids, was likely to bind with the protein that HIV uses for penetrating cells.

This tendency to bind stems from the peptide’s free energy state, a physical property related to its shape, which would change if it attached to the HIV protein. The researchers looked for peptides that would shift to a lower energy state after binding to the HIV protein, because these would be more likely to bind to the protein and thus be capable of blocking the virus from entering a cell.

Out of millions of possible peptides, the Princeton researchers used their formula to narrow their search to five promising drug candidates, each 12 amino acids long, one-third the length of Fuzeon. Their collaborators at Johns Hopkins then tested whether the peptides were truly effective at preventing HIV from entering human cells.

The Johns Hopkins scientists found that four of the five designed peptides inhibited HIV and that one of the peptides was particularly potent, even against strains of HIV that are resistant to treatment with Fuzeon. They also found that peptides designed by the Princeton researchers were nontoxic to cells.

“One could never test all the possible peptides to see if they are effective against HIV,” Floudas said. “But this model was able to sort through millions of possibilities and identify just a few that show promise.”

Now that they have identified possible candidates, the researchers plan to experiment with modifying the shape of the peptides to see if they can be made even more effective against the virus. They also hope to expand the use of the model to other diseases, particularly cancers.

“It’s an approach to finding peptide-based drugs that target certain proteins, whether those of a virus or those of a cancerous cell,” Floudas said.

In addition to Siliciano, collaborators from Johns Hopkins included Lin Shen, a former doctoral student; Philip Cole, a professor of pharmacology; and Martin Taylor, an M.D./Ph.D. candidate who graduated from Princeton in 2005. Hoki Fung, a former Princeton doctoral student who is currently serving as a postdoctoral fellow at √âcole polytechnique fédérale de Lausanne in Switzerland, also participated in the research.

The research was supported by the National Science Foundation.