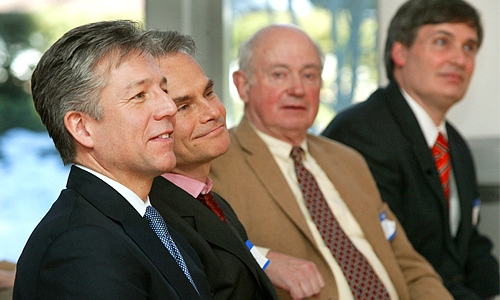 The realization that wind turbines and freight trains have a lot in common changed the trajectory of Warren Powell’s career.

For decades, Powell, a professor of operations research and financial engineering at Princeton University, has used his expertise in applied mathematics to help the U.S. freight industry streamline the movement of goods and services around the country, making American companies more competitive and environmentally friendly.

In recent years, as concerns about the environmental impacts of fossil fuel use have grown and new technologies have emerged, Powell has shifted his focus to study problems related to energy.

“It turns out that the mathematical concepts and computer algorithms we use for trucks and trains work for the energy industry as well,” Powell said. “It’s all about resource allocation, whether you need to assign trains better or need to decide how many wind turbines to keep running.”

With businesses and utilities exploring new ways to generate, store and use electricity, Powell has started a number of energy-related research projects in collaboration with industry. The most mature of these efforts analyzed whether industrial-sized batteries could be used to offset the volatile nature of energy demand and pricing. In February, the success of the batteries project led to Powell receiving $3.5 million in funding for his energy systems research over the next five years.

The support comes from SAP, a major provider of business software, and is intended to help its clients in the energy industry operate more effectively — including NRG Energy, a Princeton-based company that provides solar, wind and nuclear power as well as fossil-fuel-based power to various regions around the United States. 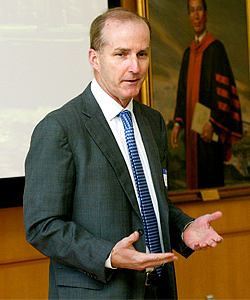 “Energy is the one basic commodity that can’t be stored in bulk,” said David Crane, a 1981 Princeton graduate and CEO of NRG. “Solving this issue is becoming increasingly important as society looks for more resources.”

At a Feb. 15 event at Princeton to announce SAP’s commitment to fund Powell’s work, Crane said unusual weather and power circumstances that converged earlier in the month had illustrated the problem at hand. Uncommonly cold weather in Texas caused homeowners to crank their thermostats up, which exceeded the capacity of electricity providers and resulted in rolling blackouts around the state.

Although NRG maintained its service throughout the incident, the company faces uncertainty on two fronts when generating electricity from solar arrays and wind farms: fluky weather and fickle electricity markets. If the wind isn’t blowing and energy demand soars, demand can outpace the wind power supply, causing energy prices to spike and potentially overburdening the electrical grid.

To take some of the guesswork out of the equation, NRG wanted to know if they could use new-generation batteries to store electricity from wind turbines and solar panels on windy and sunny days so the energy could be used later, when demand is high.

To help NRG answer this question, Powell began looking into the problem, supported by $500,000 in initial funding provided by SAP a year ago. Although he was studying the energy industry, Powell drew from his experience applying his academic research in math to operational challenges faced by the trucking industry, railroads and business jets.

Previously, Powell helped one of the largest U.S. truckload carriers, Schneider National, develop an algorithm that simulates the collective decision-making of the company’s dispatchers, who must manage more than 15,000 drivers in complex circumstances made uncertain by the vicissitudes of weather, traffic, customers and drivers. The method combines concepts from various areas of mathematics and computer science to solve complex problems by breaking them down into simpler problems. 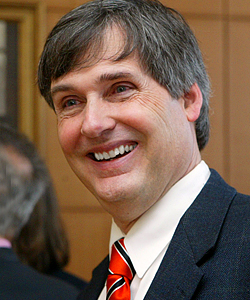 Broadly speaking, the area of math is known as “stochastic optimization,” and focuses on developing algorithms that help organizations make decisions in situations where uncertainty — whether in the form of gas prices, wind conditions or other variables — plays an important role. In these situations, the number of variables and the level of uncertainty can make efforts to calculate predictions and choices extremely difficult or impractically time consuming. Powell discovered ways to solve such complex problems using a strategy known as “approximate dynamic programming,” which involves taking sequential steps to make decisions and incorporate random new information and then learn from each step to make better decisions in the next round.

Having honed his method in the transportation industry, Powell is now excited about applying optimization concepts to the field of energy.

“I just love wind because it’s stochastic — and that randomness makes things difficult and interesting to model,” Powell said.

To help NRG decide if batteries could be used to store energy from wind turbines, Powell and Jae Ho Kim, a Princeton doctoral student in electrical engineering, set out to model how energy prices fluctuated in Texas, one of the major markets in which NRG operates.

With Powell’s guidance, Kim developed a formula that described the wildly volatile prices, laying the groundwork for understanding whether battery storage could help stabilize and better predict energy prices.

This work is also leading to a new theory for solving problems where an analyst cannot find average values in a big data set, or even how much the data varies from an average value. Problems with this surprising “infinite variance” violate a fundamental assumption that the field has made for the last 60 years, Powell said, but are becoming evident in complex industries such as transportation and energy where variables such as the price of electricity at a given time and place are unpredictable.

At the February event, Princeton President Shirley M. Tilghman said the project serves as a model for collaborations between the University and industry.

“The best collaborations are always those where there are mutual benefits,” she said. “It has really touched the twin missions of the University: the generation of new knowledge and education.”

The work also is a model for Princeton’s Andlinger Center for Energy and the Environment, a recently formed research and teaching program aimed at combining the University’s strengths — from engineering to policy — in developing sustainable energy solutions.

Powell plans to work with materials scientists such as Princeton’s Craig Arnold, a professor of mechanical and aerospace engineering affiliated with the Andlinger Center, to help develop the battery-based systems to store wind and solar energy.

Powell also is helping New York City officials who are concerned that the city’s burgeoning numbers of electric cars, trucks and buses could outpace the electric grid’s ability to keep them charged.

Three Princeton undergraduates working in Powell’s lab are exploring whether cutting power to large buildings during times of peak demand for electricity might help offset the demand from electric vehicles.

Whatever new energy-related projects Powell takes on in the future, he plans to keep working on problems that force him and his students to test their ideas and models in real-world situations.

“Life is not as neat as we academics sometimes assume,” he said. “When you get out and talk with a company, you discover there’s a lot going on that you didn’t realize.”