Note: View or share comments on a blog intended to honor Grieb’s life and legacy.

Dale Grieb, a long-time administrator at Princeton who was widely respected for her gentle insistence on improving processes and building effective teams, died Monday, May 21. She had been diagnosed with pancreatic cancer in February.

Her collaborative approach often extended her influence far beyond the specific offices in which she worked, and she was regularly called upon by colleagues across the University to help advance broad institutional goals.

“Time and time again we asked her to solve the institution’s extremely complicated problems,” said Mark Burstein, executive vice president. “Her positive, thoughtful approach to issues and her deep caring for Princeton and its people will be missed by me and I am sure by many other colleagues across the campus. She set a standard of empathy and commitment for all of us.” 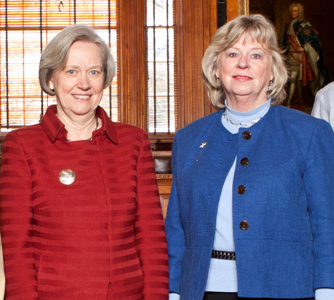 In many of her positions, Grieb had responsibilities for improving lab safety, a position that required working with faculty members to change habits and procedures while ensuring that their research could flourish. Garth Walters, director of the University’s Office of Environmental Health and Safety said he and his staff often turned to Grieb when conflicts arose, particularly when faculty members found policies to be onerous.

“Dale was able to broach things in a way that turned people around,” Walters said. “Dale managed to get people to see what was in it for them.”

“She truly exemplified the concept of a University citizen,” Walters added.

Her approach was to connect with the person and purpose behind an issue, said Robin Izzo, associate director of environmental health and safety. “With Dale it was always partnering. She would never say, ‘Here is the requirement and you have to do it,'” Izzo said. “She would be the person who would look at things more closely and ask how can we make this as simple as possible, looking at what are the obstacles.”

Grieb brought that outlook to all her positions, said Professor Fred Dryer of the Department of Mechanical and Aerospace Engineering, who worked with Grieb first in the department’s undergraduate office and then when he served as associate dean of the School of Engineering in 1987.

“She was selfless in supporting the undergraduates who came into our offices and also the graduate students in my research group,” Dryer said. “One of her most enduring qualities was her ability to resolve differences. I’ve seen her take two people who were deeply at odds, sit them down in a room together and say ‘Ok, what really is the problem here?’ And then everyone walked out of the room working together.”

In one of her most recent projects, Grieb helped lead an effort to improve safety for undergraduates working in machine shops across the University. Not content with simply writing new policies, Grieb worked with Dan Nosenchuck, associate professor of mechanical and aerospace engineering, to address the deeper reasons why students might have accidents, such as fatigue and deadline pressure. In the months prior to her death, Grieb and Nosenchuck designed a pilot project management component that was incorporated into his junior-level design course.

“What amazed me was that from the hospital she was fully engaged in helping implement this project management component,” Nosenchuck said, noting that she relished the opportunity to help impart some of her own passion for project management to students who could carry the skills forward in their work.

“Dale epitomized the can-do spirit that is embodied at Princeton and that we try to instill in our students,” Nosenchuck said.

In 1991, Grieb was appointed department manager in chemical engineering, a position she held until 2004 when she returned to the dean’s staff in the engineering school. For more than a year during that period – in 1996 and 1997 – Grieb served on a special assignment to the Office of the Provost, working under then Provost Jeremiah Ostriker to lead a team responsible for standardizing the purchase and maintenance of thousands of computers across the campus as well as creating a standard system of training and support. Grieb directed a team of 20 staff members from across the University implementing the policies, arranging training and deploying 1,400 computers in 100 offices.

That project provided Grieb an unusual opportunity to work directly with her husband, John Grieb, an expert in computer applications and database management who was assigned by Ostriker to be the project’s technical lead. “Dale and John did a fabulous job,” Ostriker said at the time.

In all her work, Grieb was consistent in her focus on supporting the greater interests of the University and in bringing out the best in others, said Pablo Debenedetti, who is vice dean of engineering and was chair of chemical engineering when Grieb was the manager. “I have never met someone who possesses anything like her uncanny ability to generate good will, no matter how difficult the situation,” Debenedetti said in nominating Grieb for the President’s Achievement Award.

In addition to her safety work at the engineering school, Grieb sought consistency and fairness in setting and complying with human resources policies, Debenedetti said. Just prior to the financial downturn of 2008, Grieb had undertaken a reorganization of the dean’s staff, an effort that allowed the school to meet the subsequently imposed cost-cutting targets a year early and avoid any loss of staff.

More than just streamlining, however, Grieb ensured that the effort allowed staff members to make the best use of their talents, said Linda Geraci, the school’s manager of finance and administration. “We started with a blank slate. To get to the right place, she asked bold and direct questions,” Geraci said.

Vanessa Ross, who was hired by Grieb and worked with her for 23 years at the engineering school before becoming assistant to the director of the Office of Career Services last year, credited Grieb with helping her advance. “Throughout the years she’s always been the person seeking you out to see how you could be an asset, helping with the opportunity that arose and making sure you would be able to achieve it,” Ross said.

As an active member of the University-wide academic managers’ group, Grieb was known for volunteering to help others and share the lessons of her experience. “She was the go-to person,” said Lisa Scalice, the department manager in the Department of Psychology. When Scalice had to expand her department’s building manager position in preparation for moving to the new neuroscience and psychology building, Grieb worked extensively with Scalice and Patrice Gensel of the Neuroscience Institute and shared examples of systems in place in the Engineering Quadrangle. “There was no question that was too dumb for Dale. She was willing to help anyone,” Scalice said.

Alongside her hard work, Grieb was known to crack jokes. Robert Kennedy, the engineering school’s manager of building and engineering services, recalled Grieb coming into his office to shoot rubber bands at him. “Here she was the ultimate safety manager and she was yelping in pain when it snapped back on her,” Kennedy said. “Maybe it wasn’t the safest thing to do but it was a light moment.”

In addition to her work at Princeton, Grieb was trained as an emergency medical technician and served for 13 years on the Cranbury First Aid Squad. As a pastime, Grieb enjoyed sailing at the New Jersey shore with her husband John. Raised in Sayville, N.Y., Dale met John Grieb in 1971 when they both worked for the Department of Mechanical and Aerospace Engineering at the University’s Forrestal Campus. John Grieb went on to serve as lead programmer/analyst at the Office of the Registrar before retiring from Princeton in 2009.

H. Vincent Poor, dean of engineering, said that beyond Grieb’s professional accomplishments, the loss felt by many will be personal. “She leaves behind her a legacy of countless essential contributions to the culture and operation of Princeton Engineering,” Poor said. “But, at a higher level, she meant so much to the people in the school. Her up-beat personality and can-do attitude inspired us all. She cared deeply about Princeton, and that care was certainly returned by the many colleagues she touched in her working life here. The untimely loss of such a wonderful friend and colleague will be felt by all of us in the school.”

In addition to her husband John, Grieb is survived by her daughter and son-in-law, Pamela and Eric Raney; her two brothers, Thomas and Lawrence Haman and their spouses; her two grandchildren, Justin and Caitlyn, and several cousins, nieces and nephews. A private memorial service will be held this week and a public memorial service will be announced at a later date. In lieu of flowers, the family asks for contributions to be made to Tuckerton Seaport (120 West Main St., PO Box 52, Tuckerton, NJ 08087), or Compassionate Care Hospice Foundation (11 Independence Way, Newark, DE 19713).