A laboratory test used to detect disease and perform biological research could be made more than 3 million times more sensitive, according to researchers who combined standard biological tools with a breakthrough in nanotechnology.

The increased performance could greatly improve the early detection of cancer, Alzheimer’s disease and other disorders by allowing doctors to detect far lower concentrations of telltale markers than was previously practical.

The breakthrough involves a common biological test called an immunoassay, which mimics the action of the immune system to detect the presence of biomarkers – the chemicals associated with diseases. When biomarkers are present in samples, such as those taken from humans, the immunoassay test produces a fluorescent glow (light) that can be measured in a laboratory. The greater the glow, the more of the biomarker is present. However, if the amount of biomarker is too small, the fluorescent light is too faint to be detected, setting the limit of detection. A major goal in immunoassay research is to improve the detection limit.

The Princeton researchers tackled this limitation by using nanotechnology to greatly amplify the faint fluorescence from a sample. By fashioning glass and gold structures so small they could only be seen with a powerful electron microscope, the scientists were able to drastically increase the fluorescence signal compared to conventional immunoassays, leading to a 3-million-fold improvement in the limit of detection. That is, the enhanced immunoassay would require 3 million times fewer biomarkers to be present compared to a conventional immunoassay. (In technical terms, the researchers measured an improvement in the detection limit from 0.9 nanomolars to 300 attomolars.)

“This advance opens many new and exciting opportunities for immunoassays and other detectors, as well as in disease early detection and treatment,” said Stephen Chou, the Joseph C. Elgin Professor of Engineering, who led the research team. “Furthermore, the new assay is very easy to use, since for the person conducting the test, there will be no difference from the old one– they do the procedure in exactly the same way.” 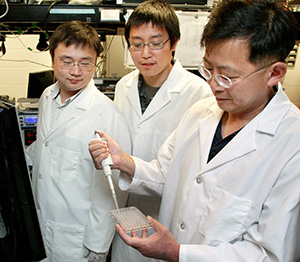 The researchers published their results in two recent journal articles. One, published May 10 in Nanotechnology, describes the physics and engineering of the fluorescence-enhancing material. The other, published April 20 in Analytical Chemistry, demonstrates the effect in immunoassays. In addition to Chou, the authors include post-doctoral researchers Weihua Zhang, Liangcheng Zhou and Jonathan Hu and graduate students Fei Ding, Wei Ding, Wen-Di Li and Yuxuan Wang.

The work was funded by the Defense Advanced Research Project Agency and the National Science Foundation.

The key to the breakthrough lies in a new artificial nanomaterial called D2PA, which has been under development in Chou’s lab for several years. D2PA is a thin layer of gold nanostructures surrounded glass pillars just 60 nanometers in diameter. (A nanometer is one billionth of a meter; that means about 1,000 of the pillars laid side by side would be as wide as a human hair.) The pillars are spaced 200 nanometers apart and capped with a disk of gold on each pillar. The sides of each pillar are speckled with even tinier gold dots about 10 to 15 nanometers in diameter. In previous work, Chou has shown that this unique structure boosts the collection and transmission of light in unusual ways — in particular, a 1 billion-fold increase in an effect called surface Raman scattering. The current work now demonstrates a giant signal enhancement with fluorescence.

In a typical immunoassay, a sample such as blood, saliva or urine is taken from a patient and added to small glass vials containing antibodies that are designed to “capture” or bind to biomarkers of interest in the sample. Another set of antibodies that have been labeled with a fluorescent molecule are then added to the mix. If the biomarkers are not present in the vials, the fluorescent detection antibodies do not attach to anything and are washed away. The new technology developed at Princeton allows the fluorescence to be seen when very few antibodies find their mark.

In addition to diagnostic uses, immunoassays are commonly used in drug discovery and other biological research. More generally, fluorescence plays a significant role in other areas of chemistry and engineering, from light-emitting displays to solar energy harvesting, and the D2PA material could find uses in those fields, Chou said.

As next steps in his research, Chou said he is conducting tests to compare the sensitivity of the D2PA-enhanced immunoassay to a conventional immunoassay in detecting breast and prostate cancers. In addition he is collaborating with researchers at Memorial Sloan-Kettering Cancer Center in New York to develop tests to detect proteins associated with Alzheimer’s disease at a very early stage.

“You can have very early detection with our approach,” he said.