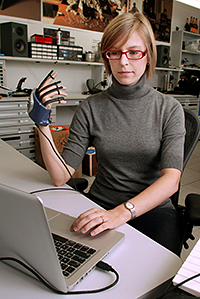 “We are researching ways that technology has the ability to allow people who are not musically trained to express themselves musically,” she said. “We are trying to offer people a way to go beyond sitting and listening and being passive consumers of music. It’s making musical performance more accessible to people without requiring them to spend 30 years training to play the violin.”

Fiebrink, who specializes in music technology and the interaction between humans and computers, is exploring methods to teach machines to find patterns in groups of data. Those patterns can be used to apply rules such as, “Whenever a user moves their arm in a certain way, play a C chord.”

There are already programs that users can configure to transform objects into instruments. But they typically require a high degree of technical skill to set up and are fairly rigid once they are running. Fiebrink wants to produce a system that is more intuitive and accessible to a wide range of people. The scientific goal, she said, is to explore ways to make technology more available in all fields.

“We are examining the question of how to make machine learning useful for real people,” she said. “We want people to be able to interact with these algorithms without getting a degree in computer science.”

Music offers a good test bed because it is something that nearly everyone has in common.

“People are inherently musical,” said Fiebrink, who trained as a flutist. “It’s a way to express yourself. It’s fun.”