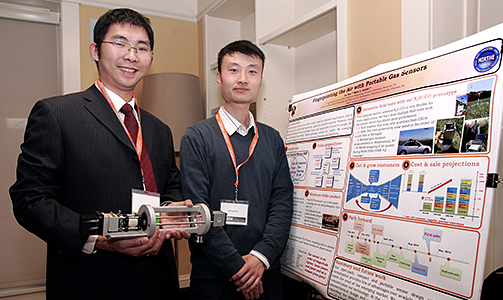 Taking top honors at Princeton University’s eighth annual Innovation Forum on the evening of March 12 was part of a whirlwind transformation for Lei Tao.

Just a year ago, the postdoctoral scholar considered himself a pure researcher, working with his adviser, Assistant Professor Mark Zondlo, to solve technical problems associated with understanding the behavior of greenhouse gases. But then colleagues around the world started asking if he and Zondlo had plans to sell the sensors they created.

Tao and Zondlo won a spot in a National Science Foundation program to provide intensive hands-on training in starting a business. Then they entered the Innovation Forum, an annual event organized by Princeton’s Keller Center to showcase research with commercial potential. Representing one of six teams that delivered rapid-fire pitches to an audience of more than 100 at Princeton’s Carl Fields Center, Tao impressed a panel of business leaders with his plan to break into the growing market for environmental sensors with a powerful, portable and inexpensive device.

“I was thinking I would be in academics,” Tao said. “Princeton opened up the opportunity for me to go into a whole new area.”

Broadening an academic focus to include a business perspective was a common story line at the gathering. The Innovation Forum brings together teams of faculty members, postdocs and graduate students to pitch ideas for commercializing early-stage research to a panel of judges. After signing up to participate, the teams submit brief descriptions of their ideas and videotaped pitches. The judges ask questions and offer feedback before the researchers make final three-minute pitches at the event. 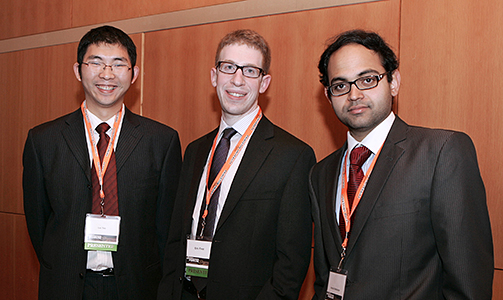 Second-place winner Eric First, a graduate student in the chemical and biological engineering, said the process was eye-opening. “I never thought of myself as being business oriented,” said First, who presented a technology that would allow operators of coal-fired power plants to remove carbon dioxide from their smokestack emissions far more cheaply and efficiently than currently possible.

First’s perspective started to shift a couple months ago when he worked with the University’s Office of Technology Licensing to obtain patent protection for his group’s work. However, even when he entered the Innovation Forum his pitch was focused more heavily on the technological innovation than the business need. The judges coached him to give more attention to the market potential and the risks that an investor would face if they chose to backing his effort. First said he also benefited from advice by visiting professor of entrepreneurship Derek Lidow and the Keller Center’s social entrepreneur in residence Brian Trelstad, who encouraged him to make his pitch more personal.

First changed his opening slide from a general overview to a photo of a 900-megawatt power plant in his hometown of Orlando, Florida, which produces 17,000 tons of carbon dioxide a day. “The problem is that if this pollution trend continues, my hometown may soon find itself facing destruction by increasingly severe hurricanes or drowning by rising sea levels,” Frist told the audience. His technology, which was developed in the lab of lab of Christodoulos Floudas, the Stephen Macaleer Professor in Engineering and Applied Science, could save $54 million a year for the Orlando plant alone, while helping stabilize levels of greenhouse gases in the atmosphere.

As the teams mixed with audience members during a reception while waiting for the judges’ decisions, First said he is now considering a career in business after finishing his Ph.D.

Third place went to Arvind Ravikumar, a graduate student in electrical engineering, who presented a new type of chemical sensor for use in military, environmental and other fields. The sensor, which emerged from the work of Princeton’s Mid-Infrared Technologies for Health and the Environment Center, offers the possibility of replacing multiple expensive devices with a single modestly priced unit, Ravikumar said.

Judges said all six presenters received high marks for demonstrating novel ideas that addressed real market needs. (For a full list of presenters, see the Innovation Forum website.) The judges also praised the Keller Center, which sponsored the event, for building a vibrant entrepreneurial culture at Princeton, bridging world-class research with the skills needed to bring a technology to market. 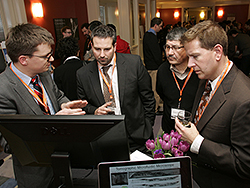 “As someone who has been in business my whole career – with big companies and small ones – I think that it is extremely helpful to have some mentors who help make these young folks aware of the business realities they are going to face as they bring these concepts to potential investors or even if they try to pursue the venture themselves,” said forum judge Frank Galuppo, chief executive of DAX Technologies based in Matawan, New Jersey.

In addition to the Keller Center and the Office of Technology Licensing, the event was sponsored by the law firm of Drinker, Biddle and Reath and the accounting consulting firm Wiss & Co. Both firms are participants in the Keller Center’s Venture Sponsors Program, a network of investors, lawyers and consultants who collaborate with Princeton faculty and students in an effort to build a regional “entrepreneurial ecosystem.”

Judges said they particularly appreciated the level of risk analysis and market research that Tao brought to his presentation, titled “Fingerprinting the air with portable gas sensors.”

Tao said that the device he and Zondlo developed could tap into the $2.2 billion market that industry and government spend on sensing gases for safety, health and environmental monitoring. Tao and his collaborators plan to market their invention as a portable, battery-powered sensor that can replace the expensive and bulky laser-based sensors that are currently used. However, he added that a significant challenge is to package their technology into an easy-to-use, attractive product, which is something he said he would use the prize money to pursue.

“Lei was really tackling something that was big and messy and really needed the miniaturization and portability that he could bring to the problem,” said judge Lorraine Marchand, principal at life sciences consulting firm BioSpark and member of Mid Atlantic Bio Angels, a group of investors who fund early-stage life sciences companies.

Tao said his presentation benefited from his previous experience with the NSF-funded program, called iCorps, a kind of business boot camp for researchers. A key part of the iCorps method was to require participants to talk to as many potential customers as possible.

That legwork impressed Marchand. “Lei qualified and quantified his problem by seeking customer input,” she said. “A really good sign for an investor and strategic partner is that he went out to 100 customers and quantified that there really is a need.”

For his part, Tao is now confident about where he wants to take his career. “I am going to try to push it as far as I can,” Tao said of his new business. “The feedback is very positive, so I think I can make it happen.”