In a fast-moving fire, a moment’s delay can lead to extensive property damage or even lives lost. To help prevent that, a team of Princeton University students is developing an easy-to-use database that will put information about buildings and fire conditions at fire chiefs’ fingertips.

“Our goal is to bring better information to firefighters,” said Charlie Jacobson, a Princeton rising sophomore and volunteer firefighter who is part of the team. “And we need to provide this information quickly and intuitively.”

The team’s product, called FireStop, is powered by a database of relevant information such as building layouts, fire hydrant location and hazardous material warnings. To find needed information, whether the closest hydrant or the number of building exits, a firefighter would just tap on the screen of an iPad. 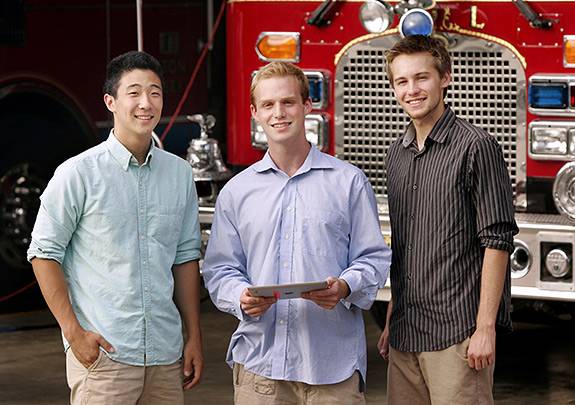 The team is developing FireStop as part of eLab, a summer business accelerator run by Princeton’s Keller Center at the School of Engineering and Applied Science. Students will present their entrepreneurial pursuits to investors and fellow entrepreneurs during the second annual eLab Demo Day from 2:30 to 7 p.m., Wednesday, Aug. 14, in the Friend Center Auditorium.

The FireStop team is of one of nine groups participating in this summer’s session of eLab, which provides workspace, mentoring and stipends for the student teams. Sanjeev Kulkarni, an electrical engineering professor who directs the Keller Center, said it is not unusual for the student teams to combine business and public service.

“Many of the businesses these students are building are sure to have significant impact on the community,” he said. “It is particularly gratifying when the teams create positive social value while pursuing their entrepreneurial passions.”

FireStop is not the first attempt at bringing better information to firefighting. Mobile databases are currently available for fire departments, but Jacobson and his team believe they have a better way to deliver information to officers commanding a fire response. 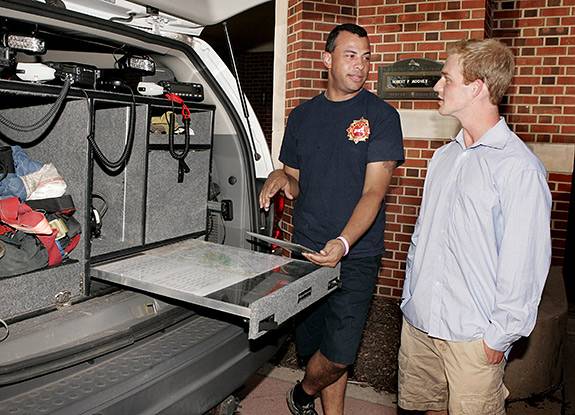 “It’s about the interface,” said Jacobson, a computer science major, who said the team is concentrating on making FireStop easy to use. “You click the button and it’s right there.”

The challenge is to make the system inclusive but easy to use. Jacobson said a straightforward format is particularly important to avoid overburdening volunteer fire companies, whose members already have fairly intensive training requirements on top of their everyday jobs. With that in mind, the FireStop system features a touch screen format designed for quick and easy use. The system also uses a secure connection between the database and the user, both to prevent unauthorized access and interruptions in communication.

“First responders have access to the information they need in seconds, without constantly relying on a mobile connection,” said Eddie Zhou, a rising sophomore team member majoring in operations research and financial engineering. “Fire doesn’t wait for you to get a better connection.”

The FireStop system has sparked interest in other quarters as well. Team members have spoken with insurance firms and building management companies about possible use by their clients. Paul Ominsky, the University’s executive director of public safety and one of FireStop’s mentors, said the system would be a great help for university police officers as well as firefighters.

The team is working with the Princeton Fire Department and Princeton University’s Department of Public Safety on a pilot project to ensure that the interface works as designed, and to nail down the method of securely including critical information in the database. One important issue is making sure that information can be collected from agencies outside the fire department, such as the town building inspector.

“We have a number of different technologies that we are integrating into the project,” Zhou said. “We need to have an efficient and beautiful interface, but we also need to have the data.”

Jacobson began working on fire databases in high school. He started volunteering as a firefighter before he could drive, and used to ride his bicycle to his volunteer company in Englewood Cliffs, N.J. The department received a federal grant to upgrade its computer system, and Jacobson helped develop the new database.

“Charlie did a project in the senior year of high schoolsaid Howie Mann, a deputy chief in the Englewood Cliffs Fire Department. “He laid out the concept of getting the data to display more easily in a more user-friendly format.”

When Jacobson started Princeton, he also joined the Princeton fire department. Along with two friends he met at the engineering school, Zhou and James Siderius, he continued to work on the firefighting system. Last spring, the three applied for entry into the eLab program, which is based on the Lean Launchpad methodology for business startups. Team members said adapting to the system’s rigorous demands for client interviews, data analysis and benchmark evaluations was difficult at first; but help from advisers including Ominsky and Vivek Pai, an associate professor of computer science, helped move the project along.

“eLab has really opened our eyes to different opportunities,” Zhou said. “It has helped us to think about where this could go as a business opportunity.”

Pai, who has founded two successful startups, said the FireStop team faced some unusual challenges. For one, they were trying to develop a product to sell to fire departments – not always the best funded agencies.

“You can’t just go to a fire department and say pay us $100 an hour to develop a new system for you because most departments don’t have the money to do that,” he said. “So one suggestion was to try to get grants to help get off the ground.”

The model is not totally new; Pai said that developers used a similar strategy for rolling out rural broadband systems when government grants made up a shortfall in funding from potential customers. He said that supporting non-traditional business ideas has proven to be a real strength of the eLab program.

“That is where Princeton’s model is really valuable,” he said. “People absolutely learn a lot, and the structure is such that certain projects are chosen that a purely commercial incubator might pass on.”