What would the world look like if you were a giant? 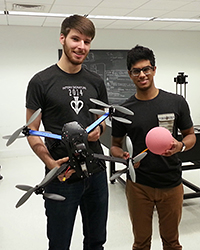 For their senior thesis in the Department of Electrical Engineering, Joseph Bolling and Ankush Gola are creating a system to find the answer to that question. In a way similar to how our brain stitches together two slightly offset images from each eye to create a 3D image, Bolling and Gola are using two quadcopters with mounted cameras to recreate the same effect on a much larger scale. Quadcopters, which are like helicopters but with four rotors instead of only one, have recently become popular among commercial and recreational drone operators.

“We want to not only enhance the user’s depth perception, but elevate their eyes,” said Gola.

Bolling and Gola drew inspiration for their project from a cartoon titled “Depth Perception” by the science comic XKCD, in which the character describes a way of using distantly spaced webcams to view clouds in his eyeglasses. In their system, Bolling and Gola plan to integrate the virtual reality headset Occulus Rift to allow users to view the world from any angle they wish, as if they were giants towering above. Aside from producing an interesting effect, the project could be especially helpful in surveying and modeling territory.

“The aerial perspective [of the quadcopter] lends itself very nicely to this type of visual effect,” explained Gola, “and quadcopter filming itself is becoming very popular, so we think will fit in well.” 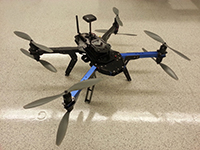 Achieving the effect they wanted proved harder than simply flying two drones with cameras. To produce a stereo image for the eyes that looks natural, the distance between the quadcopters has to be kept consistent. In Bolling and Gola’s system, one of the robots acts as the master unit while the other one follows, tracking it by laser and GPS to constantly measure the distance between the two. Their current plan also includes mounting a pink ball on the master unit so the other drone can track it with a camera. Even with the hardware working, processing the feedback to control the system is challenging.

The whole time, each of the quadcopters captures images or videos that are sent to the main computer and stitched together to form a 3D perspective.

Such technical challenges are just what independent research should offer, the duo said, noting that coming up with the idea and obtaining funding was straightforward. Resolving details as they emerge is a commonality in engineering systems, they said.

Although there is still much work to be done on their quadcopters, Bolling and Gola are making steady progress toward their final goal. But just the fact that they are building a physical system with which they can actually interact is very rewarding. And flying the quadcopters, according to Gola, is the best part.

“I think humans are always curious about flight and flying,” he said.

And perhaps soon we’ll know what it looks like to stand on the shoulders of giants.