Dean H. Vincent Poor celebrated the largest class in the history of the Princeton School of Engineering and Applied Science during the Class Day ceremony on Monday, June 1, noting the members’ outstanding performance in academic, athletic and artistic pursuits.

“We really are delighted to see the interest in engineering at Princeton in recent years,” said Poor. He said the 332 members of the Class of 2015 would be moving on to a wide range of careers following graduation including top graduate schools, businesses, professional sports, military service, professional schools and startup ventures.

“It has been a true pleasure to work with such a talented group of students,” he said.

Among the 303 class members pursuing BSE degrees and 29 pursuing AB degrees in computer science, the winners of major awards at the Princeton Engineering Class Day were:

An electrical engineering major with certificates in the applications of computing and in robotics and intelligent systems, Bolling was awarded the Steers Award, which recognizes scholarly work with potential for further engineering study and practice. For his independent work, Bolling, of Jacksonville, Florida, developed a method to use drones to capture 3D video images. Working jointly with Ankush Gola, Bolling used quadcopter drones to create 3D videos of locations including Fine Hall. Their adviser, Prof. Andrew Houck, said Bolling excelled “at every design project that he took on.” After graduation, Bolling will work at Microsoft.

A civil and environmental engineering major with certificates in architecture and engineering and in engineering and management systems, Shullman received the Steers Award for his work on hurricane flood mitigation strategies. For his thesis, Shullman, of Boca Raton, Florida, developed a case study for hurricane mitigation in New York City. His advisor, Prof. Ning Lin, said the work demonstrated Shullman’s strength in analysis and computer modeling. Shullman will work for Clark Realty Capital.

A physics major with a certificate in engineering physics, Stone received the Kephart prize, which recognizes an outstanding student in the engineering physics program. The award is open to both engineering majors and physics majors. Stone, of Austin, Texas, constructed an apparatus to study fermionic lithium. His adviser, Assistant Professor Waseem Bakr, noted that some of the graduate students in his group are already using Stone’s project as a reference. “This is an impressive feat given the complexity of modern quantum gas experiments,” Bakr said. After graduation, Stone will attend graduate school in physics at the University of Chicago. 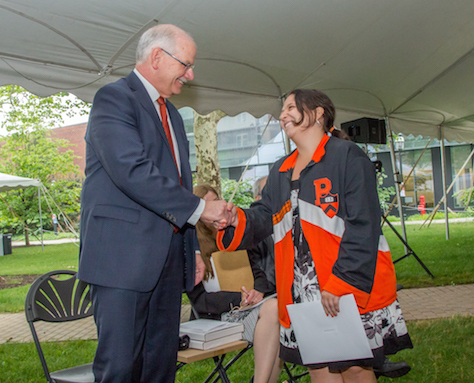 An operations and financial engineering major with a certificate in East Asian studies, de Freitas was awarded the Elgin Prize, which recognizes the member of the senior class who has done the most to advance the interests of the engineering school in the community at large. De Freitas, of Sao Paolo, Brazil, has been involved in a number of service initiatives starting with his work in Ghana during his bridge year and continuing with the Princeton Social Entrepreneurship Initiative. For his thesis, he worked with the Homelessness Prevention Program of the Crisis Ministry of Mercer County to apply statistical tools to analyze the program’s client base over the past ten years to better understand the community’s needs. His adviser, Professor Alain Kornhauser, said “Henrique not only created a better understanding of the fundamental characteristics of the homeless population and its needs over time, but more importantly was able to correlate the effectiveness of the ministry’s various programs with those characteristics.” After graduation, de Freitas will work at JPMorgan Chase.

A mechanical and aerospace engineering major from Highland Park, Illinois, Woldenberg has been involved with many service organizations at Princeton including Unite for Sight, which provides eye care to those who cannot afford it, and Best Buddies, which works with special needs students. She is the co-founder and student director of the Global Jewish Philanthropy Fellowship. For her thesis, she designed and evaluated a robotics curriculum to generate an early interest in education among elementary school students. Working with 3rd and 4th graders at the Village Charter School in Trenton, Woldenberg developed activities for the students that involved the elements of engineering design. Her adviser, Michael Littman said he was “very impressed with her work (and) her originality.” After graduation, she will work at Telnyx. 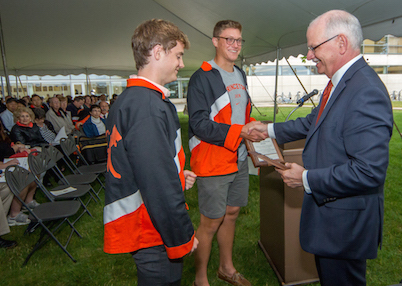 A mechanical and aerospace engineering major from Potsdam, New York, Grimberg received the Mueller Award in recognition of the combination of scholarly achievement and athletic performance. In his freshman year, Grimberg walked onto the heavyweight crew team and earned a spot on the third varsity 8 boat. Coaches Matt Smith and Greg Hughes both praised his leadership, determination and mentorship of younger teammates. His thesis examined satellite transfer into geosynchronous orbit using low-thrust electric propulsion and demonstrated that there would be sufficient power for both orbital transfer and altitude control using hardware already on communications satellites. His adviser, Professor Jeremy Kasdin, said Grimberg’s work was one of the most thorough and advanced senior projects he has read and was a significant contribution to the aerospace community. After graduation, Grimberg will pursue a doctorate in aeronautics and astronautics at Stanford University.

A civil and environmental engineering major from Glencoe, Illinois, Manhard was a four-year member of the men’s swimming and diving team. In his junior year, he broke the Princeton record for the 1-meter diving competition that had stood for nearly 40 years. He competed as a member of three Ivy League championship teams and served as team captain in his senior year. Greg Gunn, the diving coach, said “Michael exemplifies what it means to be a collegiate student and athlete.” For his senior thesis, Manhard developed empirical formulations and carried out a series of experiments at DeNunzio Pool to examine the effect of perceived inconsistent performances of diving boards on competitions. His adviser, Assistant Professor Sigrid Adriaenssens, said the results should be of considerable interest to the sport of diving. He will continue his studies in civil and environmental engineering at Stanford University. 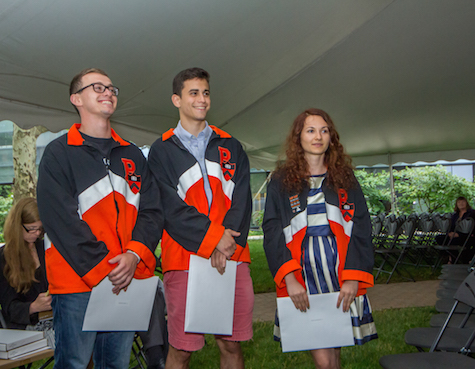 A civil and environmental engineering major with a certificate in architecture and engineering, Buzatu received the MacCracken Award in recognition of the thesis or project that is most distinctive for its inventiveness and technical accomplishment. For her thesis, Buzatu, of Slatina, Romania, developed an exterior sun-shading system that uses folding tiles to shade a structure in response to changes in sunlight. In addition to constructing physical models, Buzatu validated her system using simulations and mathematical models. Her advisor, Prof. Sigrid Adriaenssens, said her work could revolutionize “building design, drastically reducing building energy consumption and enabling building skins to be selective about light transmission.” After graduation, Buzatu will pursue a graduate degree at the Yale School of Architecture.

A chemical and biological engineering major with certificates in applications of computing and in engineering biology, Maslan was awarded the von Jaskowsky prize, which recognizes a senior who has participated in research that resulted in a contribution to the field, whose interaction with others has added to the quality of the University, and who intends to pursue a career in engineering or applied science. Maslan, of Burlingame, California, derived boundary-layer equations to describe transport processes and studied biofilm formation while working in the Princeton Complex Fluids lab. At Gilead Sciences, a biopharmaceutical company, she developed biomarkers for use in treating ulcerative colitis. Her senior thesis examined patterns of cyclic dominance among microbial populations that attack other populations and are, in turn, attacked by others. Using large-scale simulations, she identified two mechanisms for maintaining diversity in such populations. Her advisor, Professor Ned Wingreen, said her results are of considerable interest to researchers trying to understand microbial diversity.

A computer science major from Dix Hills, New York, Portnoy’s senior thesis addressed the challenge of protecting communications metadata ‚Äì information concerning who a user talks to and when they talk to them. Working with advisors Professor Ed Felten and Dr. Joseph Bonneau, she developed a system that protects communications metadata and is suitable for ordinary users. Bonneau, a researcher at Stanford University, said “Erica took on one of the defining technical challenges of our era ‚Äì that of ensuring that everybody can communicate privately without fear of surveillance by government or corporations.” Portnoy is a recipient of the Anita Borg Scholarship and was invited last fall to attend the BlackHat Europe Briefings, one of the world’s biggest information security events. She served as co-president of Princeton Women in Computer Science and organized the Engineering Council Teaching Awards for the past three years. Professor Jennifer Rexford said that Portnoy “is a force of nature who makes things happen.” After graduation, she will pursue as doctorate in electrical engineering and computer science as a chancellor’s fellow at the University of California at Berkeley.

An electrical engineering major from Decatur, Georgia, Fridovich-Keil was awarded the Hayes-Palmer Prize, which recognizes the member of the senior class who has demonstrated excellent scholarship, capacity for leadership and the promise of creative achievement in engineering. A two-time recipient of the Shapiro Prize for Academic Excellence and a member of Phi Beta Kappa and Tau Beta Pi, Fridovich-Keil took courses in 15 departments and programs. He served as a resident advisor in Wilson College, vice-president of the Koleinu a capella group, a residential counselor in the Center for Jewish Life, a math tutor in the McGraw Center, and an Orange Key and Tau Beta Pi tour guide. For his senior thesis, he worked with Michael Yuan to develop a novel approach in which robots move computation wirelessly to local computers. The project reduces the need to provide bulky and expensive computational equipment on individual robots. They also developed a system to handle the complexity of managing computation for multiple assets. Their advisor, Professor Paul Prucnal, said he was impressed with the team’s planning, thoroughness, creativity and good humor in the face of numerous challenges. After graduation, Fridovich-Keil will pursue a doctorate in electrical engineering and computer science at the University of California at Berkeley as the holder of a National Science Foundation Graduate Research Fellowship.