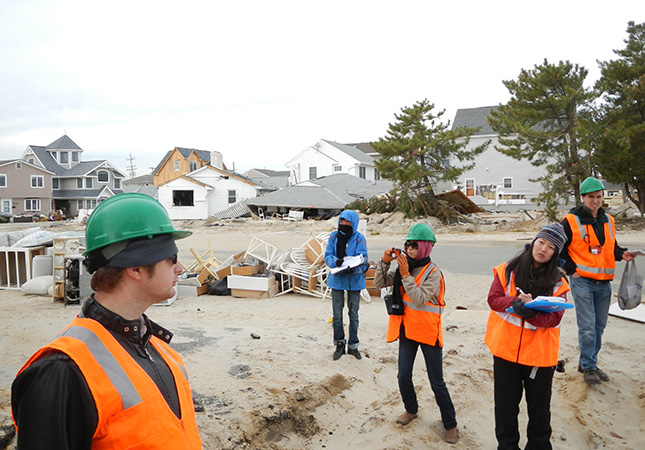 Hurricanes are among the most studied weather patterns on the planet – scientists track them with radar, watch them with satellites and fly through them with special aircraft.

But despite the effort, and the high stakes involved, major gaps remain in scientific understanding of these colossal storms.

“There are still many aspects that remain poorly understood, particularly as hurricanes move inland,” said James Smith, the William and Edna Macaleer Professor of Engineering and Applied Science and chair of civil and environmental engineering.

Smith is among a group of researchers at Princeton and affiliated institutions pursuing better methods to quantify the threat that hurricanes pose to coastal communities.

“We are working to develop tools for realtime forecasting and for long-term risk analysis,” said Ning Lin Ph.D. ’10, an assistant professor of civil and environmental engineering. “We are trying to estimate extreme wind, storm surge and rainfall all at the same time.”

Lin is collaborating with a number of colleagues to better understand how hurricanes change as they move inland and how to quantify the threat that different storms pose to communities along the Atlantic and Gulf coasts.

“We want to better predict the chance that a location will be hit with a hurricane and better estimate the severity of the damage,” Lin said.

In one project, Lin and Smith are collaborating with researchers from the U.S. Geophysical Fluid Dynamics Laboratory in Princeton to develop models that better predict how hurricanes develop as they pass over land.

“Over land, hurricanes lose many of the common characteristics of hurricanes over the open ocean, and these changes affect the hazards of extreme rainfall and flooding,” Smith said. “It won’t necessarily change the aggregate amount of rain, but it will create regions of extremely heavy rainfall.”

Smith and Lin also are collaborating to develop a model to simulate the effects of hurricanes interacting with storms that don’t originate in the tropics, as was the case when Hurricane Sandy, or “Superstorm Sandy,” devastated areas of New York and New Jersey in 2012. The researchers say the interaction, called extra-tropical transitions, can alter both the track and the severity of storms along the coast – so it is critical to understand the phenomenon, particularly for northern states.

Lin also is collaborating with Jianqing Fan, the Frederick L. Moore, Class of 1918, Professor in Finance, to develop advanced statistical methods to estimate the frequency and severity of hurricanes and model how they will evolve with the changing climate. Fan said that the goal is to better understand risks that specific areas face to allow society to make decisions about development in coastal regions. 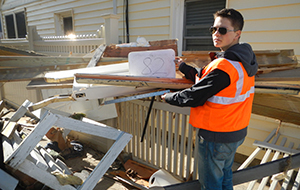 “What are the risks, what are the tradeoffs, if we decide to build in a certain area?” he said. “With a better understanding of statistical modeling and hurricane physics, answering that question is quite possible.”

In addition, Lin aims to predict storm damage based on characteristics that are specific to certain locations. Toward this goal, her team conducted a detailed examination of damage in Ortley Beach, New Jersey, in the aftermath of Hurricane Sandy, along with a research team from the University of Notre Dame.

“Our students documented the damage, converted the photos and images to numbers, and developed a comprehensive GIS-based database,” Lin said. “Then they did analysis on the damage to determine why some houses were more damaged than others – what contributed to the damage, how it was affected by environmental conditions, and other factors.” The researchers compared their findings with flood maps produced by the Federal Emergency Management Agency and found that the federal maps underestimated the study area’s vulnerability to storm surge damage.

“We think their wave modeling is not sufficient,” Lin said. “If an area is on high ground, they assume it will not be vulnerable. But waves can cause severe damage to nearshore structures, even if they are on relatively higher ground.”

The researchers are continuing to work on their damage calculations with a goal of developing a specific model both to forecast possible damage and to give planners an opportunity to minimize damage in the long run.

Lin, who helped support the different projects with grants from the University’s Project X Fund, the Andlinger Fund for Energy and the Environment, and the Cooperative Institute for Climate Science, said the grants allowed for collaborations that are often difficult to support by other means.

“Princeton is a great environment for collaboration, but when you rely on outside funding you often find yourself collaborating with people in your field,” she said. “These funds have allowed us to explore new collaborations across several different disciplines.”