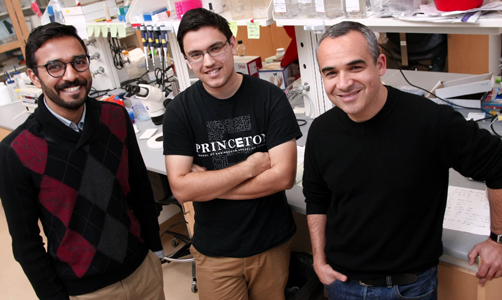 When graduate student Yogesh Goyal told an audience at Princeton University in October how his research could help doctors diagnose patients with difficult-to-characterize congenital disorders, he was describing more than a potential medical breakthrough. Goyal’s presentation was a thread in a story about the evolution of a field and a community of researchers at Princeton that promises a bold new approach to understanding and harnessing biology.

Goyal came to Princeton’s Department of Chemical and Biological Engineering three years ago with no biology background thinking he would continue to study chemical engineering as he had as an undergraduate in India. But after taking a course taught by his current advisor and professor in the department, Stanislav Shvartsman, Goyal became intrigued by the chemistry inside living cells.

“In Stas’ course, he used many biology examples and showed us how chemical reactions occur in living organisms, just at the microscale,” said Goyal. “It made me want to work on biological questions.”

But Goyal still worried about the challenge of learning an entirely new field. The push he needed came from across campus. He met Gertrud Sch√ºpbach, Princeton’s Henry Fairfield Osborn Professor of Biology, who encouraged him that grasping biology was within his reach.

“She gave me the confidence to work on both engineering and biology,” Goyal said.

Goyal joined Shvartsman’s lab at Princeton’s Lewis Sigler Institute for Integrative Genomics, and on Oct. 3 took home one of the prizes for best “poster presentation” at Bioengineering Day, a daylong symposium featuring talks by faculty from several departments, alumni and others around the burgeoning area of research at the intersection of biology and engineering.

“This is a booming field,” said Shvartsman, who collaborated with Professor Celeste Nelson to organize Bioengineering Day. “We wanted to bring together students, faculty, and alumni to provide more momentum for the bioengineering collaborations going on at Princeton.”

Co-advised by both Sch√ºpbach and Shvartsman, Goyal teamed up with fellow graduate student Granton Jindal and undergraduate Kei Yamaya to develop a mathematical model of the behavior of gene mutations involved in an eclectic group of genetic disorders known as RASopathies. About one thousand different mutations, in several different proteins, can lead to such disorders, which range from problems in the early development of blood vessels to immune system problems. These mutations can be readily identified in a patient’s genome, yet, clinicians can still only make a crude prediction of how a particular mutation will clinically affect a patient.

Goyal and Jindal took a systematic approach to initially study 16 such mutations. Goyal created fruit flies each carrying a single mutation and then analyzed and compared each mutant against the other 15 mutants. Jindal did the same in another model system, the tropical freshwater zebrafish, in collaboration with associate professor of molecular biology Rebecca Burdine. The two graduate students demonstrated the ability to quantify and rank the effects of the mutations in both fruit flies and zebrafish, an approach that could aid diagnosis of the human disorders.

“We saw a clear ranking of the mutations with some resulting in very severe effects in the fly and zebrafish and some having less severe effects,” said Goyal. “We think the ranking could be useful to clinicians who initially evaluate these patients.”

Blurring the lines between life sciences and engineering disciplines to solve science and health problems was an underlying theme of Bioengineering Day. “One of the goals and successes of the day was to provide a sense of community for the bioengineers on campus as well as our alumni,” said Nelson, an associate professor of chemical and biological engineering.

One of the day’s speakers was Moshe Pritsker, who earned a Ph.D. in molecular biology in 2005 and is now the editor in chief and co-founder of JoVE, the Journal of Visualized Experiments. Pritsker explained that JoVE is a new approach to scientific publishing-a peer-reviewed online scientific journal that captures researchers performing experimental techniques for biological and clinical research on video and publishes these in the same way print journals publish text-based scientific papers.

Pritsker described for the audience his experience merging science with business to create a modern scientific publishing company. “For me, this symposium highlighted the huge variety of applications at the intersection of biology and engineering,” said Pritsker. “Everyone has different approaches and combinations of approaches from different disciplines that result in new and unexpected questions and results.”

From a publisher’s perspective, Pritsker said he is seeing the evolution of rapidly emerging scientific methods and tools. “In the last few years, we have seen growth of bioengineering at scientific and academic institutions, of traditional biologists using bioengineering methods, such as microfluidics, and also the influx of engineers who are tackling biological questions.”

As biology becomes more technology-driven, said Pritsker, “these new tools are changing the types of questions scientists ask, including ones that never existed before.”

In another Bioengineering Day talk, Howard Stone, chair of mechanical and aerospace engineering, discussed how the intersection of engineering and biology has produced fundamental insights into the behavior of bacteria. Stone studies the flow of substances-of water, blood, air-and their interaction with surfaces. For the past six years, he has worked collaboratively with molecular biology professors Bonnie Bassler, Zemer Gitai, and Ned Wingreen, who all study bacteria. “All living systems have flow and the there are many health problems associated with movement of bacteria,” said Stone. “We work at the boundary of fluid mechanics and bacterial movement, trying to understand when flow matters for these organisms.”

With Gitai, Stone has tackled how bacteria such as the human disease-causing Pseudomonas aeruginosa is able to attach itself to surfaces and migrate against the flow of liquid, such as in water pipes and within our own gut and respiratory tracts. “This is a problem that involves mechanics and material science as well as control, by the bacterium, at the gene and protein levels,” Stone said. The students and postdocs who work on such problems “have to live a bit in both worlds, which is a challenge, but also great fun,” Stone said.

In addition to Stone’s talk, the symposium included keynote talks by Niles Pierce, a 1993 alumnus and professor of applied and computational mathematics and bioengineering at the California Institute of Technology, and Hang Lu, professor of chemical and biomolecular engineering at the Georgia Institute of Technology in Atlanta. Other speakers included Mona Singh, professor of computer science and the Lewis-Sigler Institute for Integrative Genomics, Claire Gmachl, professor of electrical engineering, and Alistair Boettiger, a 2007 alumnus and postdoctoral fellow in the Department of Chemistry and Chemical Biology at Harvard University.

“It was really a fantastic day,” said Nelson. “Around the posters and between the talks, it was terrific to see participants bubbling with enthusiasm about their work and that of their colleagues.”