Producing better quality of ultrasound images could be as easy as taking a selfie. That was the pitch that Princeton University graduate student Jen-Tang Lu made to judges at the Keller Center’s Innovation Forum Feb. 24 as he described how his technology could improve the diagnosis of many medical conditions.

“Current ultrasound imaging depends strongly on the skills of the technician,” said Lu, whose pitch earned him the event’s top prize. Users must consider probe pressure, position and body angle, while the images in general have problems with resolution, contrast and noise, he said. 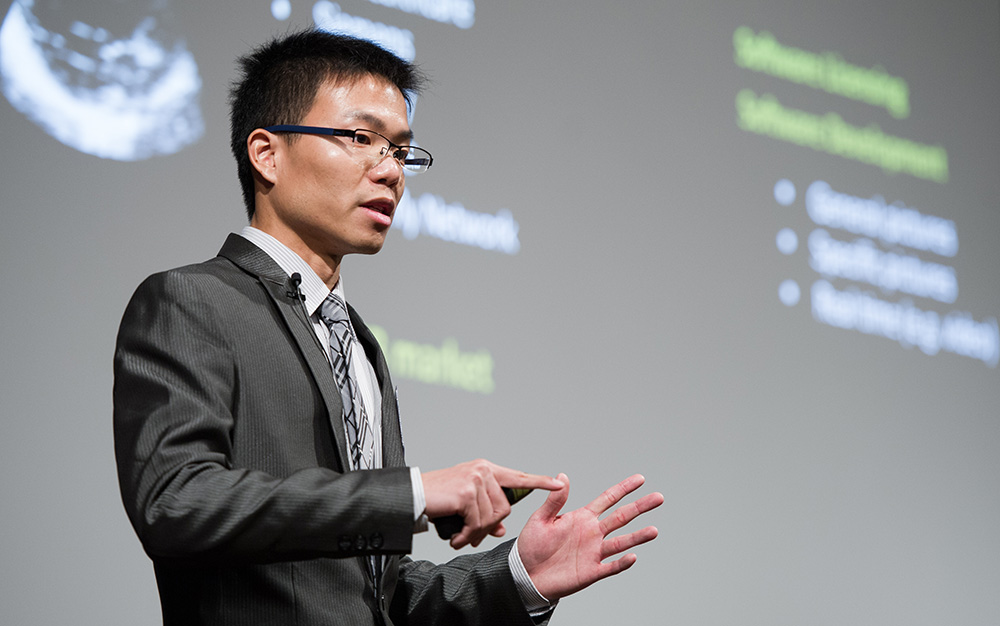 Working with Jason Fleischer, associate professor of electrical engineering, Lu has developed an advanced imaging technique to overcome these problems. The method works in real time for all ultrasound devices, from heartbeat monitors to hospital and research machines, by combining physics, biology, and computer algorithms that automatically identify anatomical structures or other features.

“We basically use the same machine and the same data, but compute our own data in the cloud. The image is sent to our server from the customer, we improve it, and then we send it back,” he said. As they process the images, the group is also buildings a database and is collaborating with several hospitals on clinical studies, so that better images result in better diagnostics.

In turn, the clinical data allow them to improve the images. “The more images the team records, the better the system works,” said Lu.

When Lu was announced as the winner, which includes $15,000 in funding, the graduate student was all smiles. He represented one of seven teams that pitched the commercial potential of research ranging from cyber security to prosthetic devices.

A member of each team delivered a three-minute pitch to a panel of judges consisting of investors and business leaders. After each presentation, the judges were allotted two minutes to ask questions on details such as potential risks and what the funding would be used for. 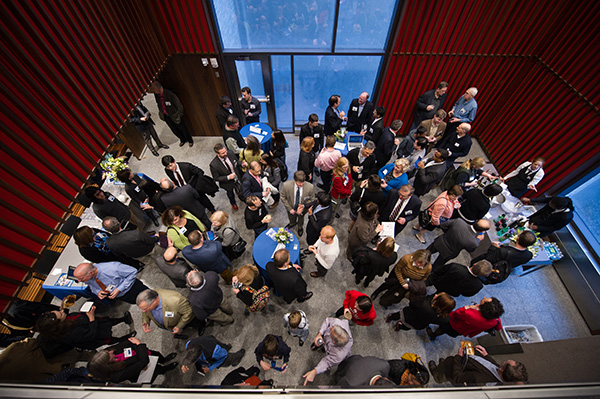 The 11th annual event, sponsored by the Keller Center and the University’s Office of Technology Licensing, took place before a large audience of students, professors, and industry professionals in Maeder Hall of the Andlinger Center for Energy and the Environment.

In the months leading up to the forum, the teams provided written drafts and recorded video of their pitches, which allowed the judges to provide preliminary feedback to the presenters prior to their final pitches.

Graduate student Jake Herb, who took home the $10,000 second prize with his group’s environmentally friendly batteries, said the biggest challenge of the forum was to condense a lot of information into a three-minute pitch.

“It was difficult trying to distill all that information while simultaneously trying to convince people to fund you,” said Herb, a Ph.D. student in chemistry. “I learned a lot about focusing the presentation on the business side rather than just the technical side.”

His team, led by Craig Arnold, a mechanical and aerospace engineering professor and director of the Princeton Institute for the Science and Technology of Materials, and associate researcher Carl Nist-Lund, developed low-cost “green” electrolytes for magnesium-ion batteries, a safer battery alternative.

Of all energy-storage devices, people are probably most familiar with lithium-ion batteries, which possesses high energy density, said Herb. Although Li-ion batteries may be good for a lot of power, they are costly and can be dangerous, with safety hazards such as fires or explosions as a result of microscopic defects in the battery.

During his pitch, Herb said their new magnesium-ion battery formulation could change the energy landscape of the future. They have created a cost-effective, high-performance, and environmentally friendly electrolyte that has great potential for scalable commercialization.

“Our component is nearly a hundred times less expensive,” said Herb. “By 2020, our product will have a $50 billion addressable market.” 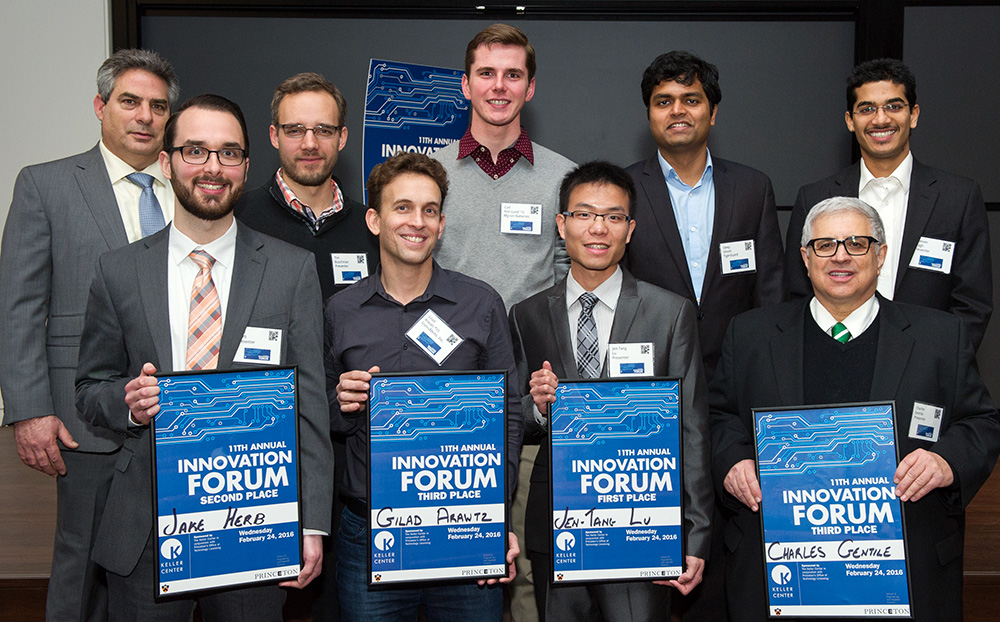 For the first time in the Innovation Forum’s history, the judges surprised the audience and presenters with two third-place winners, Gilad Arwatz of Instrumems Inc. and Charles Gentile with his production of a uranium-free medical isotope.

The company is based on a new sensing platform called “nano-wire” that allows measurement of temperature, velocity and humidity. “Our sensors, which could be used anywhere from mobile phones to the natural gas industry, are small and about four to five times faster than available devices,” said Arwatz. “A lot of high-end sensors are also very expensive. We provide a faster and cheaper measuring technique that also results in smaller footprint compared to other conventional measurements.”

He said the funds will help them start manufacturing finished sensors.

For Gentile, an engineering and scientific staff member with the Princeton’s Plasma Physics Laboratory, competing in the Innovation Forum was a new experience. Gintile collaborated with fellow PPPL colleague George Ascione and Adam Cohen, deputy undersecretary for the U.S. Department of Energy, to develop a process to produce a nuclear isotope used for diagnostic medicine without the use of uranium, which usually is required.

The goal is to make the medical technology more readily available to people, particularly to communities throughout the developing third world, said Gentile. As a result of the process, they eliminated transportation issues associated with complicated supply chains, thus providing a wider distribution. 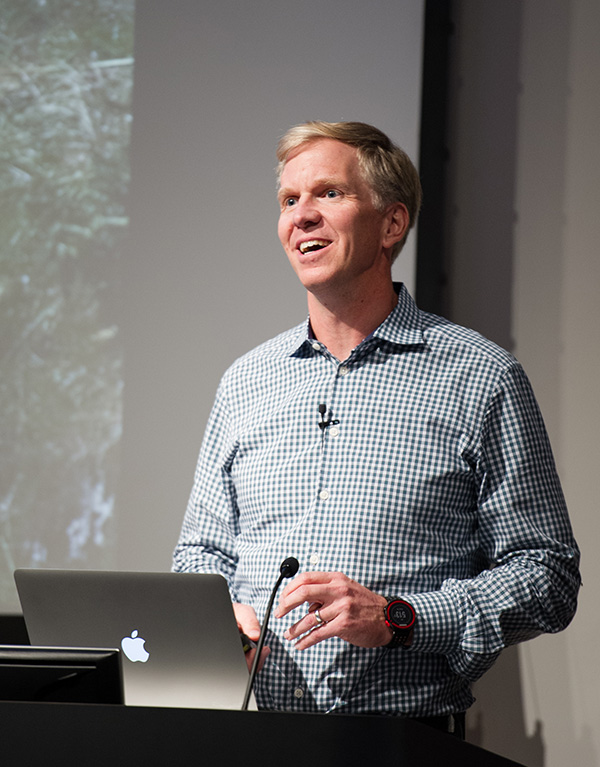 In addition to the presenters, keynote speaker Gordon Ritter, a Princeton alumnus and high-tech business pioneer, encouraged aspiring entrepreneurs to take risks and be comfortable with change. He said it is important to “avoid the herd,” seek diversity, follow good leaders, and “find your superpower.”

“Make sure you chart your own course,” said Ritter. “Jump off cliffs as often as possible. It keeps you alive and fresh. Go against the natural grain and take risks, but take it at a level that’s appropriate to you.”