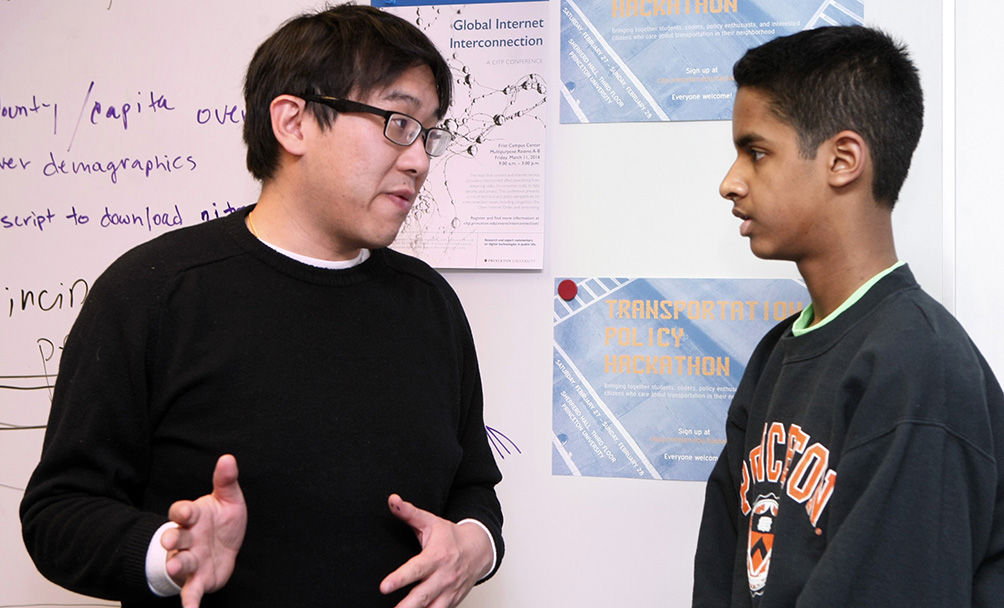 A smartphone application that alerts drivers to local road hazards could help avoid accidents and be a step towards improving transportation policy, Princeton University professor Garnet Chan told an audience during the hackathon sponsored by the Center for Information Technology Policy (CITP) and Code for Princeton on February 27 and 28.

In an intensive 48 hours of coding, Chan and two partners created just such an app. The team’s project, “Save Your Car,” was one of four that won recognition at the hackathon, an event that attracted about 90 computer coders, policy enthusiasts, and interested citizens – from Princeton students and faculty to local middle school students. Teams spent the weekend in Sherrerd Hall brainstorming and creating digital technologies to solve transportation problems. Participants also could join transportation policy discussions and introductory coding tutorials.

Save Your Car provides optimal driving directions between two points while avoiding problems such as unfixed potholes and fallen branches. It goes beyond existing tools such as Google Maps, Chan said, by incorporating local user inputs collected in municipal databases such as Access Princeton. The app could be used by local governments to report issues such as road closures in case of emergencies like hurricanes or snowstorms, Chan said.

True to the ethic of hackathons, which bring together new collaborators, Chan, the University’s A. Barton Hepburn Professor of Chemistry, teamed up with local programmer and hackathon veteran Edderic Ugaddan and eighth grade student Ben Mathews to create Save Your Car.

“We’re looking to develop this app so it can work globally, so if someone was in India or China and was not familiar with the road conditions, then they could use this,” Ugaddan said. “It’s something that is useful and almost anybody can use.”

Chan said his work with the University involves a lot of scientific software development, and he sees group coding events as an important way to energize software development. His own research team, the Chan Group in theoretical chemistry, have hosted their own small hackathons.

For CITP’s hackathon, the chemistry professor wanted to see what technical and management skills he could bring as a participant. “In addition to that, transportation software is broadly relevant to many lives, including my own, so it was not difficult to be interested,” he said. 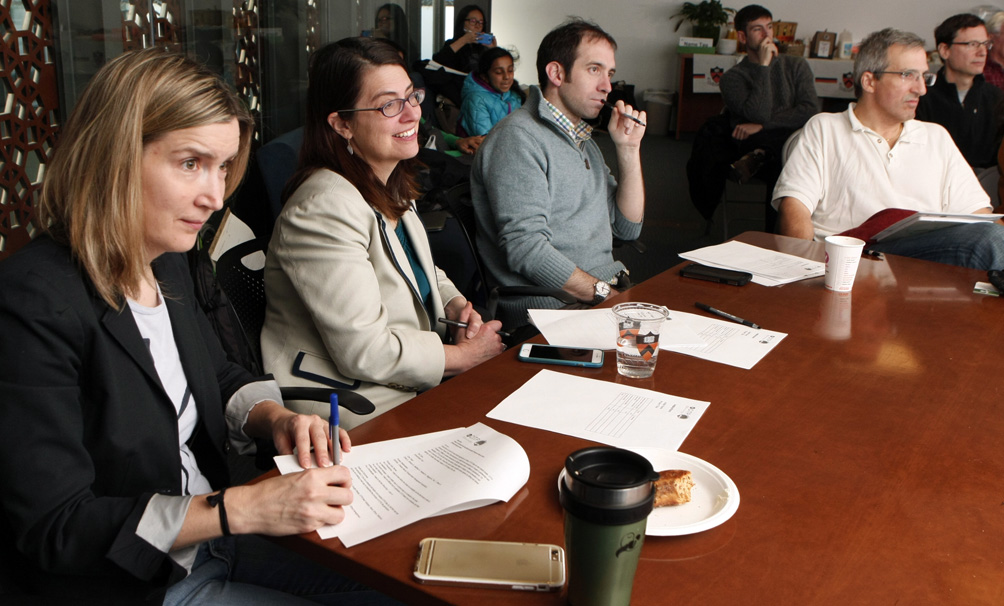 The event was the inaugural hackathon sponsored by CITP and Code for Princeton, a community tech group interested in open government and “civic hacking.”

CITP developed the idea of a policy hackathon as a way to harness the power of technology to work on urgent social issues, said Feamster. The event encouraged interdisciplinary teams to keep projects focused on responding to policy needs in a practical manner.

“We chose transportation because it’s relevant to almost everyone,” said Feamster, noting that transportation policy is not a traditional theme for hackathons. “We wanted to find different ways to discover new strategies where technology plays a role.”

Issues addressed at the hackathon reflect an “intersection of digital technology and public life,” which is the focus of the center, Feamster said. CITP also saw the hackathon as a way to reach out to the local community and strengthen ties between the University and the municipality.

For Claire Ralph, director of Code for Princeton, building connections between programmers, technologists and the government is vital to keeping communications open and building trust in government.

“We want to encourage open data,” she said. “There’s a disconnect between the public and the government, so it’s important to get people talking and see what are the possibilities by bridging that gap.”

Seeing a diverse group of people coming together to find solutions to a problem has been very exciting, said Ralph. “There’s a lot of learning going on and I think it’s also important for people to see that they have a role in creating something that can change policies.”

Team “Ghost Bus,” who came up with a tool for local transit agencies to translate their route schedules into a standardized data feed readable by applications like Google Maps, won the prize for “Most Likely to See Immediate Use,” while Team “Uncrash” won “Most Likely to Affect Policy” through their web-based application that allowed citizens to download and visualize New Jersey vehicle-crash data. 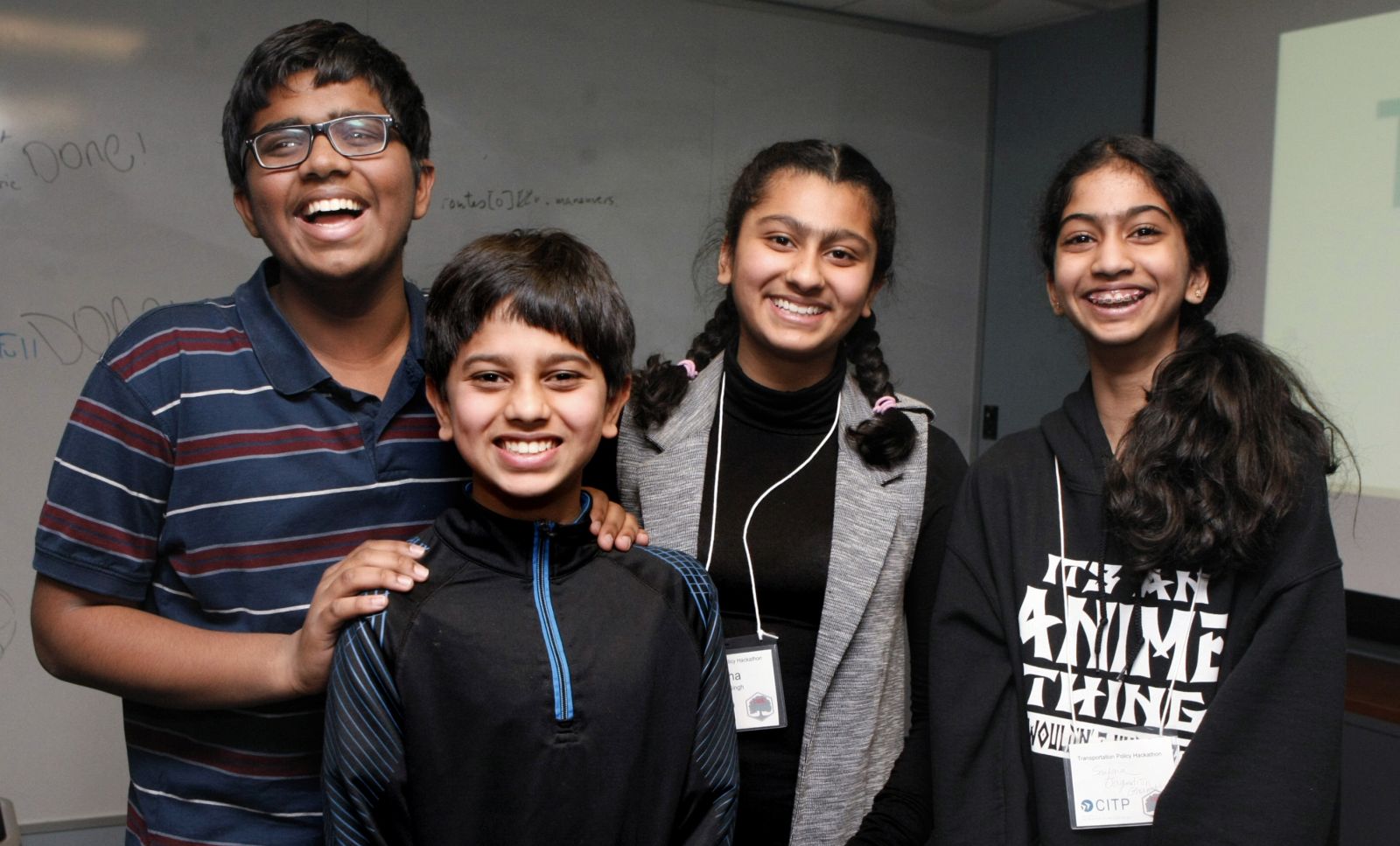 “Hacking energy” was high throughout the hackathon but perhaps nothing compared to the exuberance that emanated from four Montgomery Upper Middle School students, whose project on school transport won the prize for “Most Creative Solution.”

“We wanted to focus on an issue that’s common,” said Singh, who has attended numerous hackathons. “We also wanted to empower other middle school students who wanted to be involved but were intimidated by competing against adults.”

At first, it was a scary experience for the middle schoolers. But Cherukupalli said they eventually found that everyone was very friendly and helpful.

“It’s exciting to know what we built could actually be implemented,” he said. “I learned so much and really enjoyed being around all the tech people. It was a fun experience.”