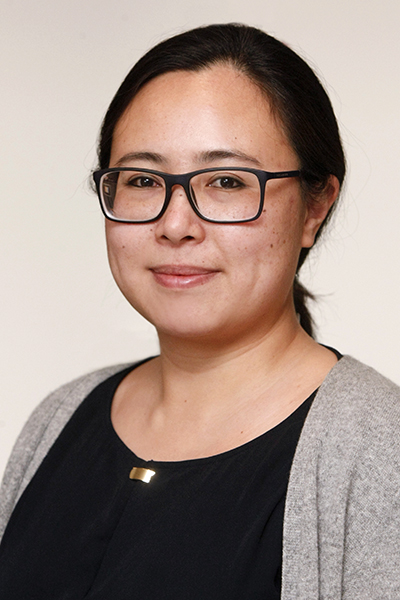 Nathalie de Leon has a penchant for diamonds. But don’t expect glittering, princess-cut jewels when visiting her lab at Princeton’s Department of Electrical Engineering, where she is a new faculty member.

Instead, the diamonds de Leon works with come in the form of thin, clear squares about the size of cell phone camera lenses. “If you don’t know what you’re looking at,” said de Leon, “the diamonds just look like pieces of glass.”

Thanks to de Leon’s research, these unassuming materials might someday be found at the heart of a host of innovative devices, such as ultra-secure communications networks or high-performance sensors for use in biology or other fields.

De Leon studies how tiny defects-called color centers-in the composition or lattice structure of diamonds cause profound changes in how the diamond transmits light and information. Researchers have found that these color centers act like single, artificial atoms isolated in a vacuum. In these elusive conditions, aloof atoms behave independently of their neighboring atoms and exhibit their innately bizarre, yet amazingly useful quantum mechanical properties, which can be controlled and harnessed.

“My main focus is on trying to build various quantum devices out of color centers in diamonds,” said de Leon. “In the long term, we have some concrete technological goals for this research, and in the short term, we have an opportunity to do some really interesting physics.”

Interdisciplinarity is the name of the game in de Leon’s lab, where people work on everything from optics and photonics (transmission of information via light) to surface science and materials engineering, atomic and molecular spectroscopy, nanofabrication, and even cryogenics.

Having this broad a toolkit is in de Leon’s academic DNA, so to speak.

Born in the Philippines, de Leon grew up in the East Bay area of Northern California. For college, she stayed close to home, receiving a degree in chemistry from Stanford. De Leon then swapped coasts to obtain her doctorate in chemical physics from Harvard University. Along the way, she switched concentrations several times, rubbing elbows with fellow researchers in large, multidisciplinary labs. “I got to see people from multiple disciplines and how they attacked a problem differently,” said de Leon.

A critical problem she and her Princeton colleagues are attacking is the limitations in quantum communication networks. These systems could provide inherently secure data exchanges because any intrusion by an eavesdropper would alter the quantum state of the information being transmitted, thus alerting the legitimate parties involved.

Conventional, “classical” communication networks send pulses of light across hundreds of miles through fiber optic cables. Some light inevitably gets absorbed en route, so periodic repeater stations boost the signal strength. Quantum communication networks would also use light pulses, but their information is ferried in delicate, “entangled” states, which cannot travel much more than a hundred miles before dissipating. Today’s repeater stations would not suffice, alas, because quantum states fundamentally cannot be copied.

What’s needed are quantum repeaters that allow quantum signals to travel long distances. De Leon thinks that color centers in those diamond flakes in her lab could do the trick.

Specifically, de Leon works with defects called nitrogen-vacancy color centers, where a nitrogen atom has taken the place of a carbon atom and sits next to an empty site in the diamond’s crystalline structure. (A pure diamond is made only of carbon.) Some of the nitrogen atom’s electrons remain in an unpaired, free state. Light beamed into the diamond can be used to excite these electrons in a precise manner, putting them-as well as outgoing light-into certain , desired quantum mechanical states. A series of these diamond-hearted quantum repeaters could form the backbone of a future, hack-proof quantum network. “Diamond color centers are uniquely suited to this task,” said de Leon.

A better understanding of the quantum states in color centers should also help with developing exquisitely sensitive, tiny, and energy-efficient sensors. The quantum states would change due to external magnetic fields, temperature and strain alterations. A particularly promising application of such nanoscale quantum sensors would be determining the structure of individual molecules, like proteins.

To push quantum technologies still further, de Leon’s group is searching for new color centers in diamond and characterizing some of the thousands already known. Defects are therefore purposefully introduced into the ultrapure diamond crystals de Leon uses, which are artificially grown by Element Six, a United Kingdom company.

This directed approach only became available in the last several years. Historically, nearly all of the work in the field of quantum optics had been done with a single, natural diamond dug out of a mine in Russia. The remarkable diamond, with few nitrogen, boron and other elemental impurities, was fragmented and distributed to research groups around the world. “Many of the groups had their own little piece of the ‘magic’ Russian diamond,” said de Leon. “At Harvard, we called ours ‘Magic Alice’ and ‘Magic Bob’.”

The spell unbroken, De Leon plans to continue her quantum abracadabra at Princeton, where she is still getting settled in. Her temporary office has nothing in it so far besides a computer and a mug. Given her dealings in diamonds, de Leon has an idea for adornment: “A jeweler’s case would be a funny thing to have in my office.”