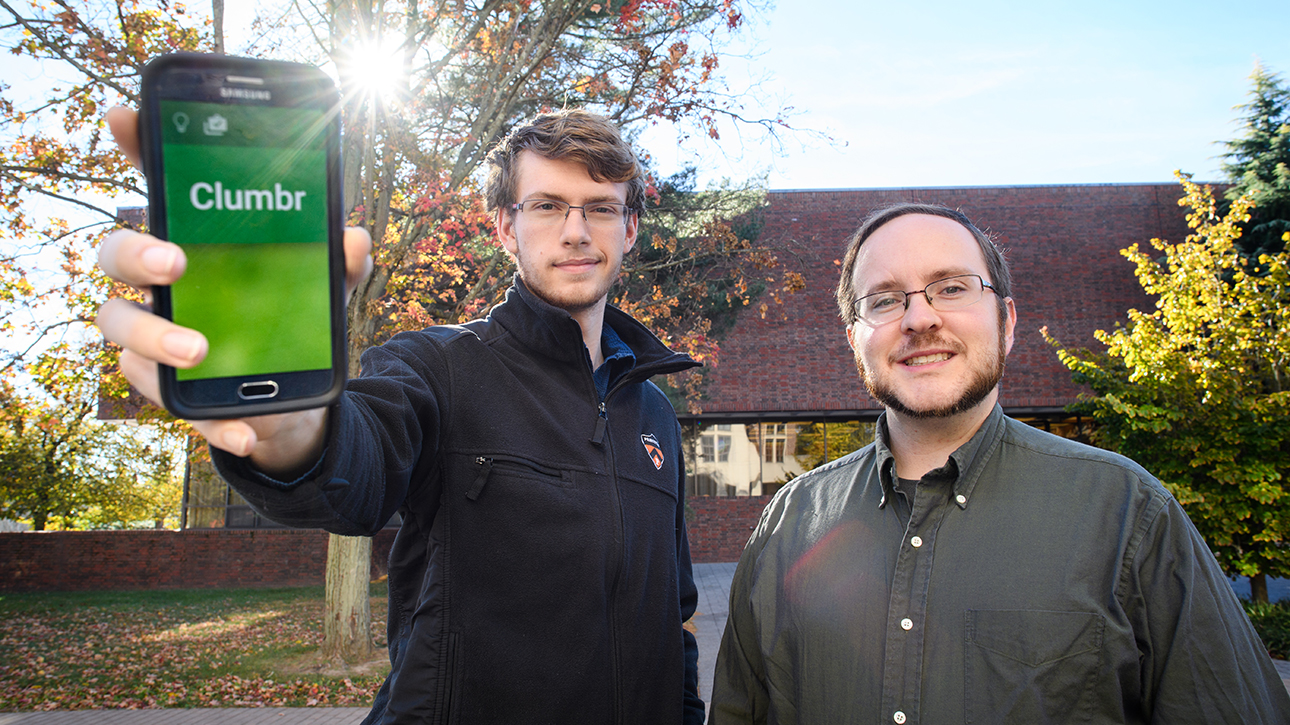 Caleb Gum and Jacob Kaplan were meeting about their advanced programming class last year when the topic veered to baseball. Kaplan, the manager of Princeton’s Club Baseball team, bemoaned the organizational headaches involved in keeping players on the diamond. Scheduling, attendance, and participation all had to be tracked.

“I said, ‘That’s our project,'” said Gum, a junior majoring in computer science. Gum and Kaplan, along with classmate Katie Lim, put their heads together and got to work. The result was Clumbr, an app that schedules and tracks participation for practically any type of team. It’s a typical experience for students in the computer science department’s “Advanced Programming Techniques” class, in which students are expected to build an app that has a user interface, uses back-end storage, and has business logic.

“They get to experience things that they’re going to see in real life, like working with their peers and dealing with assignments that are underspecified,” said Brian Kernighan, a computer science professor who taught the course for many years. Gum’s team worked with lecturer Christopher Moretti, who led the course last spring.

Gum said one of the highlights of the class was developing a finished product – Clumbr is available on the Google Play store. He said the experience was “really positive.”

“Being faced with a challenging real-world scenario, we did just fine,” he said. –by Ezra Austin ’19 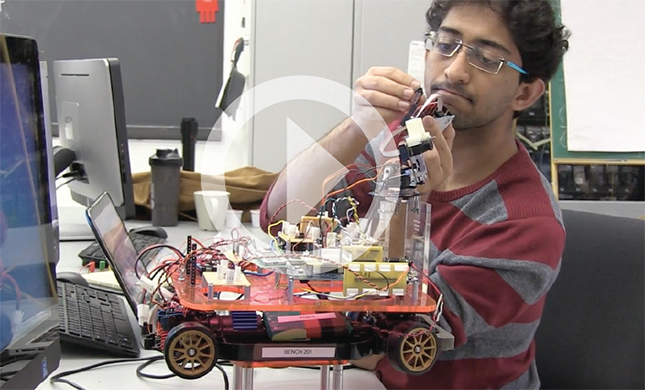 Watch a video about the class: http://bit.ly/car-lab

Robot dog-car. Balance on a ball. The BB-8 robot from Star Wars.

From nerf gun turrets to ball-balancing robots, electrical engineering students in Car Lab apply the theoretical knowledge they’ve accumulated from their departmental courses to build their own inventive robotic machinery.

“The class gave me the opportunity to be an actual electric engineer,” Fesjian said. “In the real world similar problems arise – something will stop working and you have to figure out why and fix it, or improvise and make something new.”

Although Fesjian said she spent between 80-100 hours working on the project, she said that building a machine almost entirely independently was incredibly rewarding and worth the hard work. –by Layla Malamut ’18

[Watch a video about the class: http://bit.ly/car-lab] 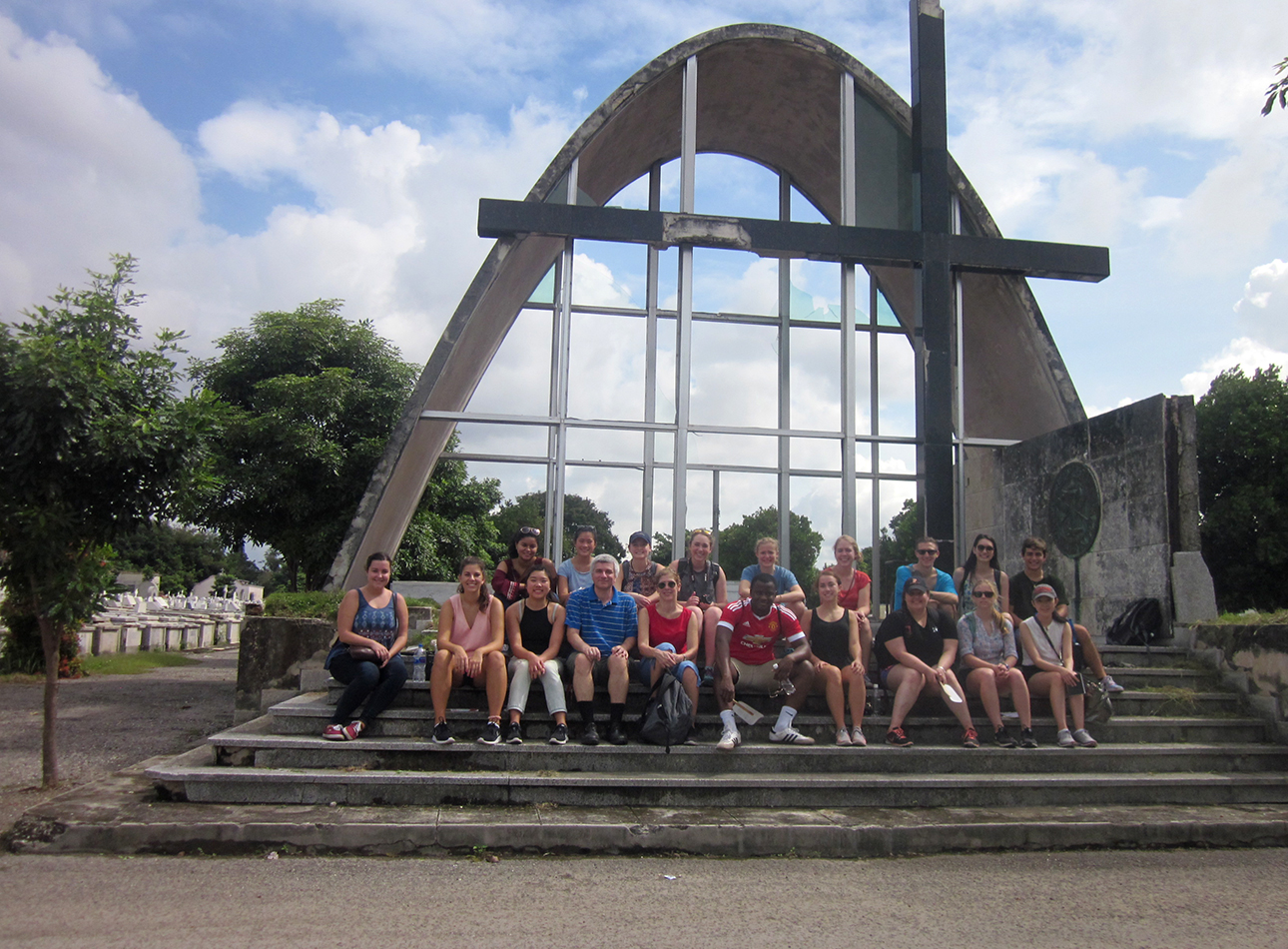 A class of civil engineering students took a field trip this year, but it was not to a museum. Over fall break, the students and their instructors flew to Havana to examine firsthand Cuban shell structures.

“I am super excited,” Corrie Kavanaugh, a senior, said a few days before the trip. “One of the things that I think is really unique about Princeton is that it gives students the opportunity to go out in the field and learn from the real world.”

Shell structures are thin, wave-like constructions often resembling an airplane wing or a balloon. In this year’s offering of the class “A Social and Multi-Dimensional Exploration of Structures,” associate professors Maria Garlock and Branko Glisic introduced students to the creative ways the technique has been applied in Cuban architecture. The students work in groups to study specific structures. Kavanaugh said her team was examining a stadium in Havana’s Parque Jose Marti.

“It’s an incredibly complex geometry, and right now we can only guess at what the curvature is from photographs,” she said. “It will be really cool to actually get to see the structure in person after modeling it for so many weeks.”

The class also has the chance to speak with a designer of some of the structures and then undertake their own models of shell structures, culminating in an exhibit at Princeton’s Friend Center.

“I’m excited to see the country and experience the culture in Havana,” Kavanaugh said. “I feel like not many people have had the opportunity to study Cuba from a civil engineering perspective, so it will also be a unique experience from that perspective as well.” –by Francesca Billington ’19 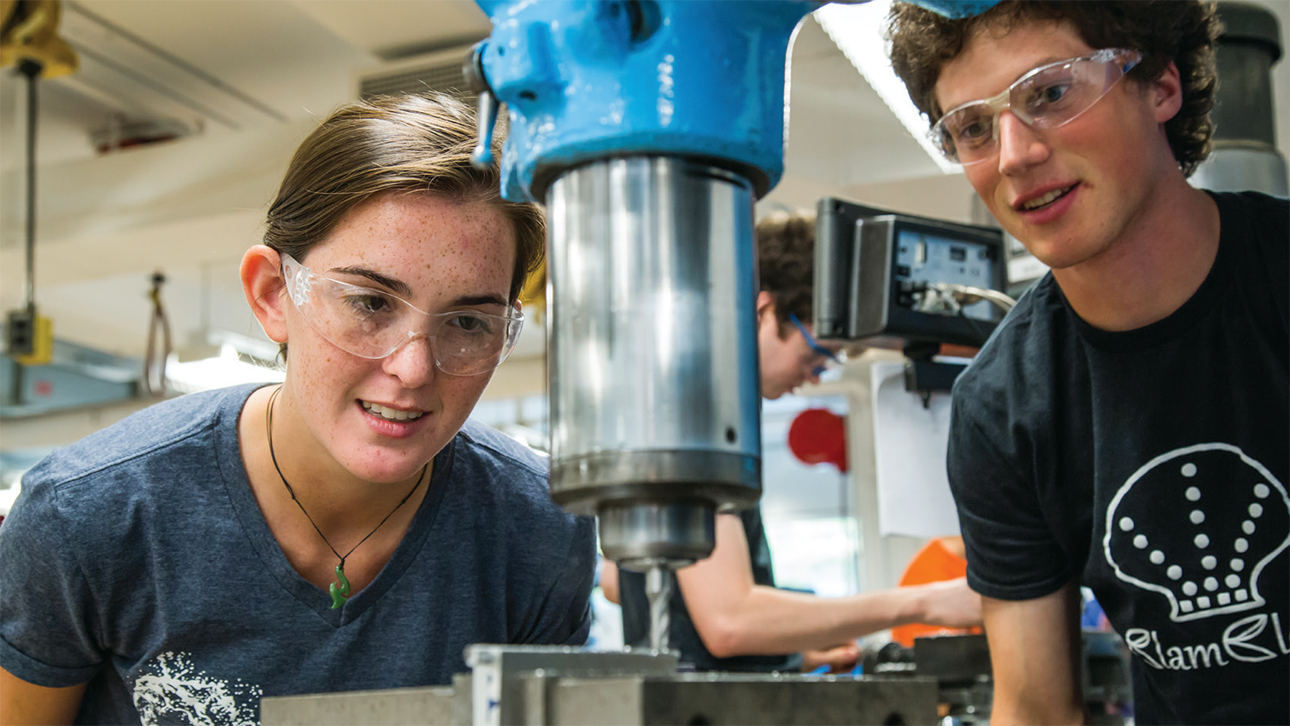 As lathes and grinders hummed and growled in the lab behind him, machine shop manager Glenn Northey proudly held out a thin, triangular metal box with a tiger’s face painted on one end.

“That weighs 2 pounds and 3 ounces,” said Northey, the main instructor this year for the Department of Mechanical and Aerospace Engineering’s “Engineering Design” class. “It lifted 500 pounds. Now that is impressive.” “Engineering Design” requires students to design and build a functional project – in this case a box shaped like an airplane wing that will lift a set amount of weight. The students must design the structure, select the material, and analyze the plans until “they know where every hole and piece will be,” Northey said. The goal is to build the lightest structure that can perform the task.

“The first two years of MAE are for building theoretical background, and this is the class in which you get to apply that,” said Isabel Cleff, a junior. “I’ve done internships, and people on my team have done other internships, and so it’s cool to combine our practical knowledge.”

Kirk Robinson, a senior who took the course last year, said the project requires teamwork and planning as well as technical skill.

“Strategies are taught in the classroom,” he said, “but you really have to do it to understand.” –by Ezra Austin ’19 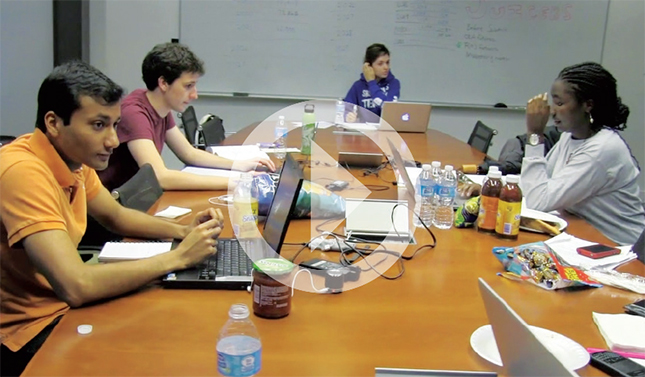 At its midpoint, the class “Operations and Information Engineering” switches from game theory to game mode.

Students spend the first part of the semester attending lectures, completing problem sets, and taking a midterm exam. But after the fall break, they prepare for the “Orange Juice Bowl,” in which teams of students compete to run the most effective hypothetical orange juice company.

“I worked in the mergers and acquisitions group of an investment bank over the summer, so I had the chance to see businesses getting sold and bought,” said June Chang, a senior majoring in operations research and financial engineering. “However, it is definitely my first experience acting (although simulated) as the operations manager of a company, from controlling how many futures contracts to purchase for varying maturities to deciding how many storage facilities to acquire and to what capacity.”

Chang said he was fascinated by the ability to use mathematics in business as a way to minimize risk and maximize profit. In the orange juice game, teams are given the probability of problems, such as broken-down delivery trucks, and asked to work them into their operations. The team members will be expected to make decisions in response to a large number of variables and changing conditions that could affect their companies.

“I am definitely looking forward to sinking my teeth into this project and seeing what works and doesn’t, and improving our policy from there,” Chang said. “I am only worried that we have a lot to learn, but I am not worried about our performance – we have a brilliant group of people who without doubt will be a great team.” –by Francesca Billington ’19

[Watch a video about the class: http://bit.ly/orange-bowl]

Seniors majoring in chemical and biological engineering pepper graduate student Wes Reinhart with questions as he leads them through the math- ematics of capturing and recovering excess heat in the most ef cient way when designing a chemical plant. (Photo by David Kelly Crow)

Lorena Grundy, a senior in the chemical and biological engineering department, said that the most exciting part of their design course is the liberty to make key design decisions.

“The course fills students with a lot of confidence as seniors about to go out into the workforce,” Grundy said. “It’s amazing that by the time the course is over, I will be able to say that I designed and built this plant, and that it actually works.”

Titled “Design, Synthesis, and Optimization of Chemical Processes,” the course introduces students to the basic tools needed to design and optimize a simulated chemical plant. Students are first introduced to the chemical engineering software required to build the plant and then break into teams of three to four students to complete the final project.

“The class is like a dress rehearsal for the real world,” said Professor Yannis Kevrekidis, adding that building enterprise plants is a nominal skill every chemical and biological engineer should have.

Students also look forward to the lab as the convergence of all the concepts taught previously in other courses. Upon completion, Kevrekidis said, the teams’ chemical plants should produce a simulated product with realistic chemistry and production rates that also addresses safety concerns and control considerations.

“What I’m hoping to get out of this class is to exercise the skills and knowledge I’ve gained over the last three years and actually design a functioning power plant,” senior Frank Nguyen said. –by Layla Malamut ’18