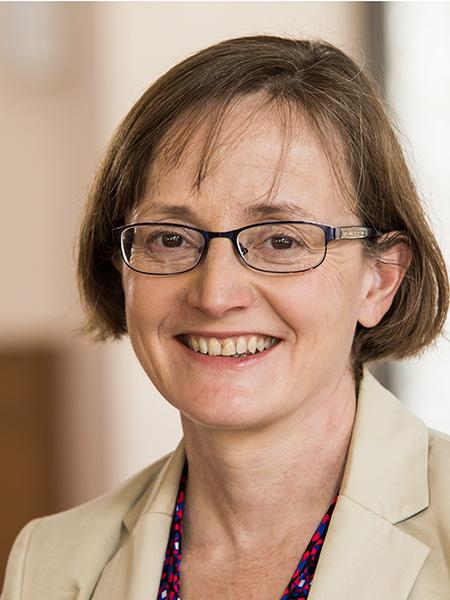 The Keller Center, created in 2005 as part of the School of Engineering and Applied Science, supports innovative courses, co-curricular activities and internships that cross disciplines, connect technology and society and foster entrepreneurship and design thinking.

Martonosi, whose research focuses on computer architecture and mobile computing, succeeds Mung Chiang, professor of electrical engineering, who led the Keller Center since 2014 and who will become dean of engineering at Purdue University this summer.

“I am simply delighted that Margaret has agreed to become the next director of the Keller Center,” said Emily A. Carter, dean of engineering and applied science. “Margaret brings a multitude of experiences to this role that will strengthen and expand the impact of the center’s work, including expertise in creating and assessing education and mentoring initiatives and a global perspective catalyzed by her recent stint as a Jefferson Science Fellow working on technology policy at the State Department. She also cares deeply about educating and mentoring the next generation.”

The Keller Center, endowed by Dennis Keller of the Class of 1953 and his wife, Constance, has a broad goal of preparing students to have a positive impact in a technology-driven society. Among its curricular offerings, the center is home to two undergraduate certificate programs. The Program in Technology and Society offers two tracks that connect societal and technical questions concerning information technology and energy and the environment. The Program in Entrepreneurship offers a curriculum in creating commercial and not-for-profit ventures, with a focus on design thinking as a methodology for solving complex problems by focusing on the needs and motivations of people affected by the problems. Both programs engage a wide range of students with technical and non-technical backgrounds across campus.

In the 2016-2017 school year, the center offered 15 courses in entrepreneurship, innovation and design.

Beyond courses, the Keller Center supports student entrepreneurship through its annual Innovation Forum organized jointly with the Office of Technology Licensing and Intellectual Property, which showcases faculty and graduate student research with commercial potential; the eLab summer accelerator program for student startups; and the Princeton Startup Immersion Program, which brings cohorts of students to New York City and Tel Aviv for the summer to work at startup companies while participating in events and workshops on entrepreneurship. The Keller Center also created Tiger Challenge, an extracurricular program that supports student teams in taking a design-thinking approach to tackling seemingly intractable societal problems.

“In just over a decade, the Keller Center has built a remarkable track record of innovative offerings in and out of the classroom.” Martonosi said. “These offerings have shaped the experiences of many Princeton students from a wide range of majors, as well as impacting the world more broadly.”

Martonosi joined the Princeton faculty in 1994 as an assistant professor of electrical engineering, and rose to the rank of full professor before switching to the Department of Computer Science in 2010. She is an associated faculty member of the Andlinger Center for Energy and the Environment, the Center for Information Technology Policy, the Department of Electrical Engineering and the Princeton Environmental Institute.

Martonosi earned her bachelor’s degree in electrical engineering from Cornell University and her Ph.D. in electrical engineering at Stanford University. Her research has focused on the interface of computer hardware and software, with a particular interest in mobile and energy-efficient computing. In a recent four-year effort, Martonosi led her research team in creating a series of tools to probe and verify the complex interactions between various layers of computing, from the high-level software used by consumers to the underlying hardware and instructions that guide how machines execute programs and manage memory. Earlier in her career, Martonosi collaborated with ecologists to develop ZebraNet, a mobile sensor network that allowed tracking of zebras and other animals in Kenya.

Martonosi has earned numerous honors for her work and teaching, including the Princeton University Graduate Mentoring Award, the National Center for Women and Information Technology Undergraduate Research Mentoring Award, the Anita Borg Institute Technical Leadership Award, and the Marie Pistilli Women in Electronic Design Automation Achievement Award. Two of her most significant research papers have been awarded “test-of-time” awards for their long-term impact on the field: the 2015 Long-Term Influential Paper Award from the ACM/IEEE International Symposium on Computer Architecture for her work on computer power modeling and the 2017 ACM SIGMOBILE Test-of-Time Paper Award for her work on ZebraNet.

During the 2015-16 academic year, Martonosi served as a Jefferson Science Fellow within the U.S. Department of State where she brought her technical expertise to bear on foreign policy questions. From 2016 until 2022, she is serving as the Andrew Dickson White Professor-At-Large at Cornell University, a visiting position extended to a few leading researchers from around the world. From 2005-2007, Martonosi served as associate dean for academic affairs for the School of Engineering at Princeton.

“As Keller Center director, I look forward to leading its next chapter, and to making sure our students and faculty have the support they need to catalyze impactful change in engineering education, and more broadly in how technology impacts society at large,” Martonosi said.