Two engineering students were among five Princeton University undergraduates celebrated for their academic accomplishments at Opening Exercises on Sunday, Sept. 10. Sally Jiao of chemical and biological engineering won the top academic prize for juniors, while Yanjun Yang of computer science was a co-recipient of the Freshman First Honor Prize. 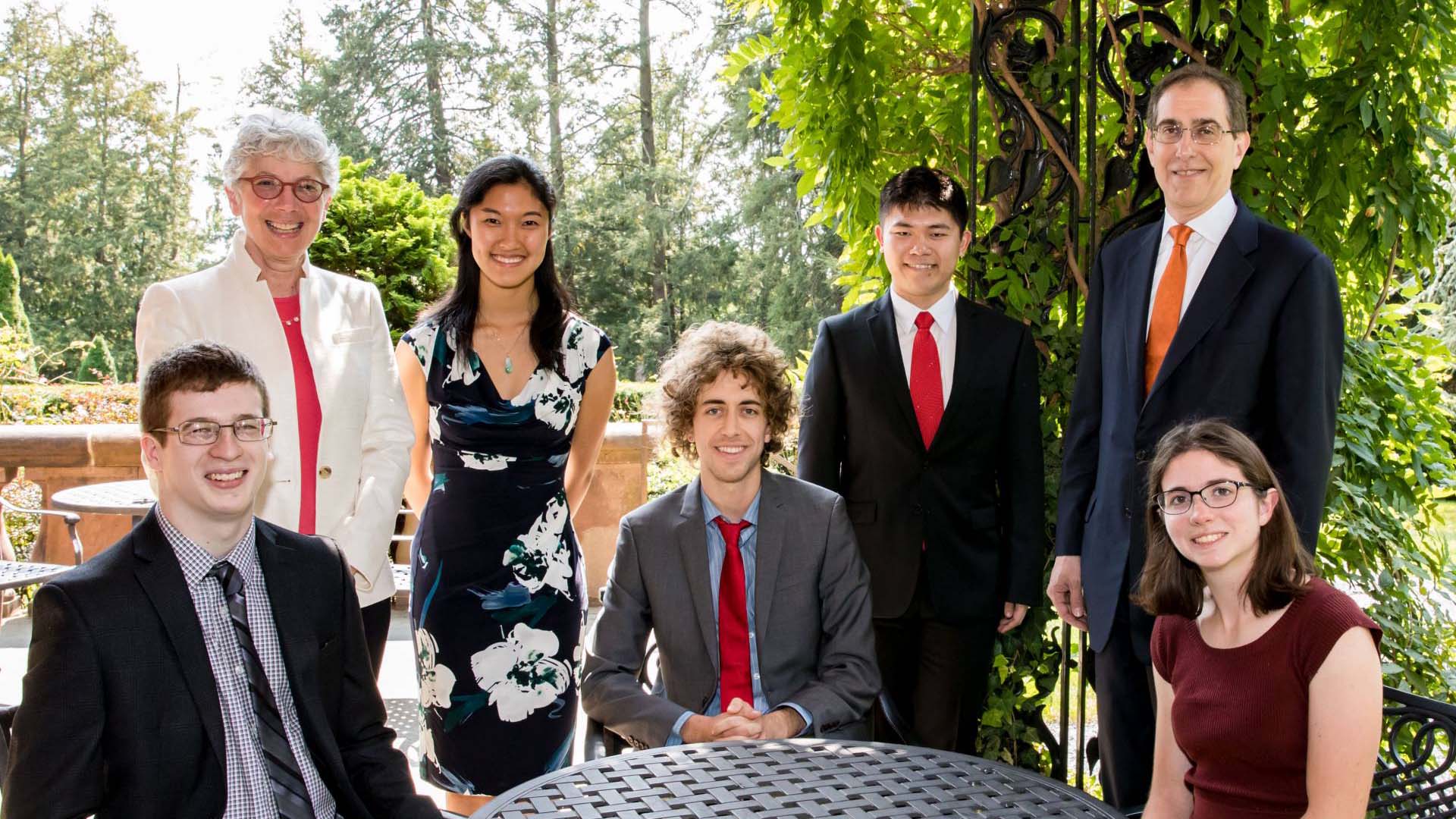 “We are proud of these prize-winning students and delighted to celebrate their academic success,” Dean of the College Jill Dolan said. “They have worked diligently at their studies, while demonstrating how to best take advantage of the many opportunities Princeton offers its undergraduate students. For instance, they belong to clubs, hold internships and conduct service work, study abroad, and excel in artistic practices – all in addition to maintaining high grade point averages. They are an inspiration to our community. I’m pleased to mark their accomplishments with these distinguished awards.”

Jiao received the Class of 1939 Princeton Scholar Award, which is awarded each year to the undergraduate who, at the end of junior year, has achieved the highest academic standing for all preceding college work at the University.

Jiao, of Monmouth Junction, New Jersey, attended West-Windsor-Plainsboro High School South. She is a chemical and biological engineering major and is pursuing certificates in applications of computing and applied and computational mathematics.

Jiao is a member of Butler College. She is a peer health adviser and served as coordinator for her college’s advisers during her junior year.

She is the head teaching assistant in the undergraduate-staffed computer science lab, helping students in three computer science courses. Last year, she was director of the Princeton University Mathematics Competition.

In summer 2016, she had a research internship at Ruhr-University Bochum in Germany, funded by the Keller Center’s International Research Exchange Program.

This past summer, Jiao was a research intern at the National Institute of Standards and Technology in Gaithersburg, Maryland. After graduation, she plans to pursue a Ph.D. in chemical engineering.

This year’s Freshman First Honor Prize is shared by Yang and Grace Sommers. The prize is awarded each year to sophomores in recognition of exceptional achievement during their first year.

Yang, of Springfield, New Jersey, attended Millburn High School. He plans to earn a B.S.E. in computer science and certificates in statistics and machine learning and finance.

A member of Mathey College, Yang was an organizer at last year’s HackPrinceton, a weekend-long event in the spring that brings around 500 college students to campus to build hardware and software tools. This year, he will be a co-leader of HackPrinceton’s operations sub-team.

Over the summer, Yang was a software engineering intern at Pure Storage in Mountain View, California.

Sommers, of Bridgewater, New Jersey, attended Bridgewater-Raritan High School. She plans on pursuing a major in physics and certificates in applications of computing and Roman language and culture.

Sommers is a member of Wilson College. She has a passion for tutoring and mentorship and this year will work as a math tutor in the McGraw Center for Teaching and Learning. She also will continue to volunteer at Princeton’s climbing wall to help children with special needs. As a first-year student, she mentored an underprivileged sixth-grader from Princeton’s public middle school.

Sommers serves on the peer review board of the Princeton Undergraduate Research Journal and will be a copyeditor this year. She has written for the space and physics section of the student-led science publication Innovation Magazine. This November, she will be a “problem czar” for the Princeton University Physics Competition, held annually for high school students.

She spent the summer on campus, programming a database of historic materials in the civil and environmental engineering department. Her work was part of the ReMatch program, which pairs undergraduate students with graduate student mentors.

Matthew Tyler received the George B. Wood Legacy Sophomore Prize, which is awarded each year to a member of the junior class in recognition of exceptional academic achievement during sophomore year.

Tyler, of Spencerport, New York, attended Spencerport High School. He is a mathematics major and is pursuing certificates in applied and computational mathematics and in applications of computing. Last year, he was awarded the Freshman First Honor Prize.

Tyler is a member of Mathey College. He is academic chair of the math club and a problem czar for the Princeton University Mathematics Competition, held annually for high school students. He also is a member of the juggling club.

In summer 2016, he participated in the Princeton-in-Munich program.

This past summer, he worked at Princeton with Richard Taylor, a visiting lecturer with the rank of professor in mathematics, on learning commutative algebra and algebraic geometry.

Kyle Berlin received the George B. Wood Legacy Junior Prize, which is awarded to a member of the senior class in recognition of exceptional academic achievement during junior year.

Berlin, of Arroyo Grande, California, attended Arroyo Grande High School. He is concentrating in Spanish and Portuguese languages and cultures and is pursuing certificates in creative writing, Latin American studies and theater. In 2015, he received the Freshman First Honor Prize.

Berlin participated in the Bridge Year Program in Peru before starting his academic program at Princeton – Bridge Year is a tuition-free program that enables newly admitted students to begin their Princeton experience with a year of public service abroad.

Berlin spent summer 2015 participating in a PIIRS Global Seminar in Namibia, taught by history professor Emmanuel Kreike. He also traveled in South America as a Sigmund Scholar through the Program in Latin American Studies, exploring the role the arts play in defining place. In spring 2016, he spent a semester studying in Cuba. In summer 2016, he traveled across Europe on a Dale Summer Award to pursue an independent project.

Berlin is a residential college adviser at Rockefeller College. He has served on the Pace Council for Civic Values and on the student board of the Community-Based Learning Initiative. He has volunteered with the nonprofits El Centro and People & Stories/Gente y Cuentos in Trenton. He has directed shows with Theater Intime and sometimes sings with Rise Up Singing. He is involved with Cuties for Social Justice and works to foster an inclusive campus culture. On occasion, he serves as an Orange Key campus tour guide.

Through a Davis Projects for Peace grant, Berlin spent this past summer conducting a theater project in his hometown on the idea of “home.” He co-founded a nonprofit, Rhizome Theater Company, and worked with others to conduct nearly 100 interviews, which were used for a script for a show his group performed, called “Nice Town, Normal People.”