Edward Felten, the Robert E. Kahn Professor of Computer Science and Public Affairs, is the director of the Center for Information Technology Policy. Felten, who studies the intersection of public policy and information technology, served as a technology adviser at the Federal Trade Commission and the White House during portions of the Obama administration. Felten often blogs at Freedom to Tinker. 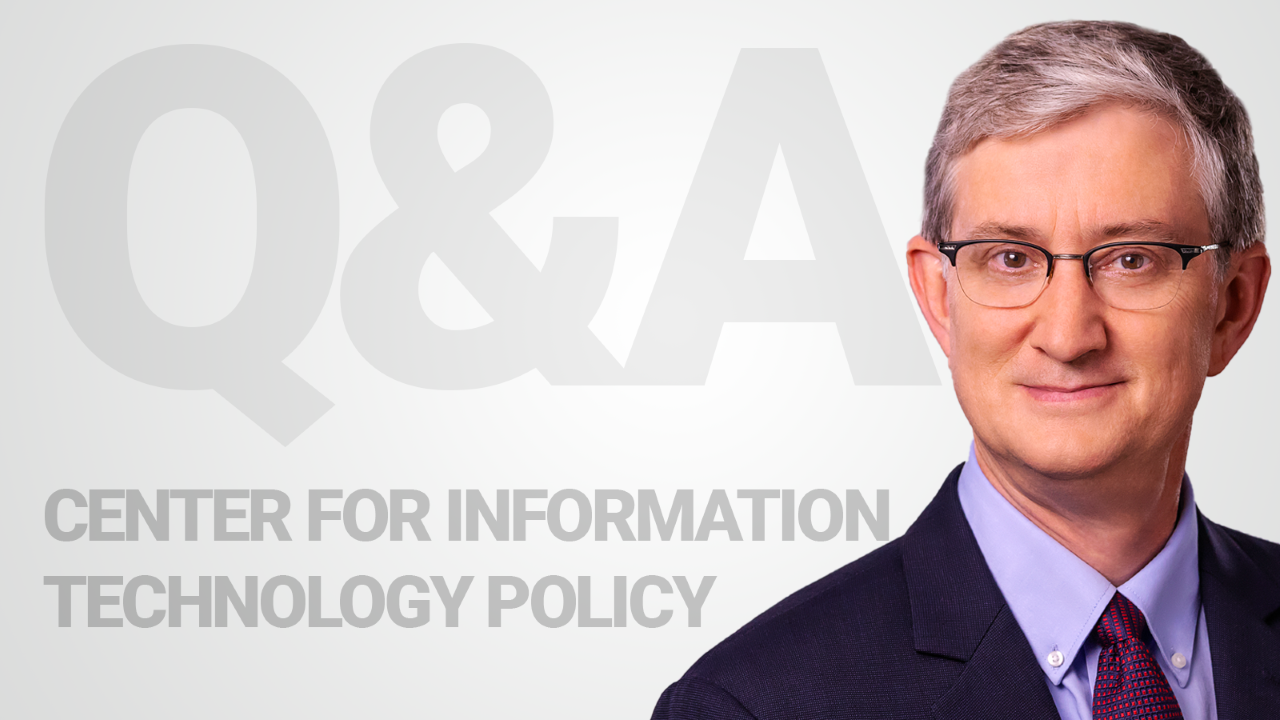 A. Well, there have been a couple of big trends. One is a general growth in CITP on campus. We have new people coming in, we have new programs, and just generally a sense of more activity and more intellectual energy, really, than ever before.

And so, at the same time that we have so much more going on here, there’s also so much more call for what we do.

Q. Are there a few areas you would like to highlight?

A. One new program that I’m really excited about is our tech policy clinic, which opened on April 1st. The clinic is a way to get students and other members of our community more connected to the day-to-day policy process.

We’re bringing in an experienced policy professional, Mihir Kshirsagar, to lead the clinic, and he will be working to get our people involved in the policy process, writing white papers, submitting comments, meeting with policy makers, and getting involved in the day-to-day policy process in a way that we’ve done only more occasionally before.

So, that’s one. Another area where I think we’ve done really ground-breaking work is in a collaboration with the Center for Human Values on artificial intelligence and ethics, where we’ve tried to work both in a deep academic way, and also in a hands-on educational way to understand the ethical implications of artificial intelligence and to try to drive a conversation that is well-informed both by the technical considerations in the field, and also by the best thinking about ethics.

Q. Princeton has top technologists and top policy experts but the fields are often very different. How do you cross that bridge? How does the center keep the world policy makers up with technological changes?

A. First of all, there’s no substitute for talking with people in the policy world, whether it’s policy practitioners or our colleagues who work in other academic fields that relate to policy. And then, we’re trying to develop, to train, and to become a new generation of people who are fluent in both of those languages: people who understand the technology deeply and also have the background and knowledge of policy to be able to function across that boundary.

That’s one of the things we’ve striven to do in CITP, and I think we’ve been fairly successful at training our students to do that kind of work. So, developing those skills and actually going and talking to policy makers is an important part of it. We have multiple faculty, including myself, who have been policy makers and have been in and out of policy roles in government. I think that’s an important part of the picture, as well. Our clinic, as well, is trying to give our students and community members practical policy experience.

Q. If you were speaking with computer science students, how would you interest them in becoming involved in policy matters?

A. I would say two things. First of all, that technology is a very powerful force, that the technologies that you are developing in your technical work are going to have a big impact on the world and you should care about those impacts. A lot of students want to work in computer science, want to be technologists, because they want to affect the world. And if that’s the reason why you’re in the field, and it is one of the best reasons to be there, then you should care about what the impact will be. I think that’s number one.

Number two is that a lot of decisions that control and govern how technology will develop are being made in the policy world. There are decisions that everybody in our society has a stake in, and has a right to participate in the debate and in the decisions.

And so, if you want to be effective in building world-changing technology, you need to be engaging with the entire society in conversations about what you’re developing and why, and what’s the best way to manage it and to make sure that it’s doing the most good for the most people.

A. I think it’s the size and the breadth of what we’re doing. We have a large community and we are very engaged across a range of different topics.

One thing that people often don’t realize immediately is how important technology is across the full range of important policy topics, across the full set of big challenges that our society faces. Whether you’re worried about environmental policy, education policy, national and international security, transportation, jobs and the economy, the health of our political system: all of those things are deeply affected by what’s happening technologically.

So, tech policy is not a narrow, specialized topic. It’s very much a cross-cutting topic that affects all policy areas. And so what we do is something that touches the entire policy world in a way that might not be immediately obvious.

There’s nothing exactly like CITP. There are some university centers that have grown out of law schools, things like the Berkman Klein Center at Harvard is a good example, or the Information Society Project at Yale. There are initiatives that have grown out of technical work in computer science or in a field like AI, the Human-Centered AI Project initiative at Stanford is an example.

But I don’t think there is an organization that’s quite like us in the way that we integrate deep computer science expertise into the policy space, and the degree of cross-disciplinary work that we do.