Spurred by the COVID-19 pandemic, Princeton researchers have developed a diagnostic tool to analyze chest X-rays for patterns in diseased lungs. The new tool could give doctors valuable information about a patient's condition, quickly and cheaply, at the point of care.

Jason Fleischer, professor of electrical engineering and the project’s principal investigator, said he was inspired to create the tool after reading about COVID-19’s devastating range of attacks. As hospitals have been overrun with patients, doctors have observed two basic types of lung damage, one more immediately life-threatening than the other. Treatment can differ between the types, so distinguishing the two could improve care and better allocate scarce resources.

While current differentiation methods involve expensive and time-consuming procedures, such as computed tomography (CT) scans, Fleischer’s machine learning model looks at a simple X-ray image and finds patterns that are too subtle even for the expert human eye. This tool would give doctors a new measure for determining the type and severity of COVID-19 pneumonia. And the process, on the ground, is simple.

“Importantly, there is no change in practice,” Fleischer said. “The technician doesn’t have to do anything differently. Hospitals don’t have to do any new procedure. With the X-rays they already have – and routinely take – we can give them this extra information.”

Fleischer and graduate student Mohammad Tariqul Islam posted a paper detailing their work on medrxiv (pronounced med archive), a server for scientists to share results in the form of early drafts while a paper undergoes the formal editorial process. At the time of this writing, Fleischer’s paper “Distinguishing L and H phenotypes of COVID-19 using a single X-ray image” has not yet been peer-reviewed.

“Single X-ray scans don’t have the type of resolution tomographic X-ray scanning does,” said Kimani Toussaint, a bioimaging expert and engineering professor at Brown University, who was not involved in the study. He said Fleischer’s group had identified an important problem with their paper, trying “to address in a very practical way how to use more readily available X-rays to quickly screen COVID-19 patients, and basically triage them or sort them into the types of treatment they should be getting.”

“I thought it was very nicely done,” Toussaint said.

Dr. John Hansen-Flaschen, the Founding Medical Director of the Harron Lung Center of the University of Pennsylvania, also not involved in this study, underscored the complexity of the situation. He expressed doubt that any one method of processing images would solve the problem, but he left open the possibility that Fleischer’s tool, as part of a whole, could be valuable.

Fleischer agrees that his tool is not a panacea. His goal is to assist doctors – not to replace decision making but to aid it. In this way, machine learning of X-ray images could have a major impact in key areas of the pandemic, and in respiratory diseases beyond COVID-19, such as asthma. 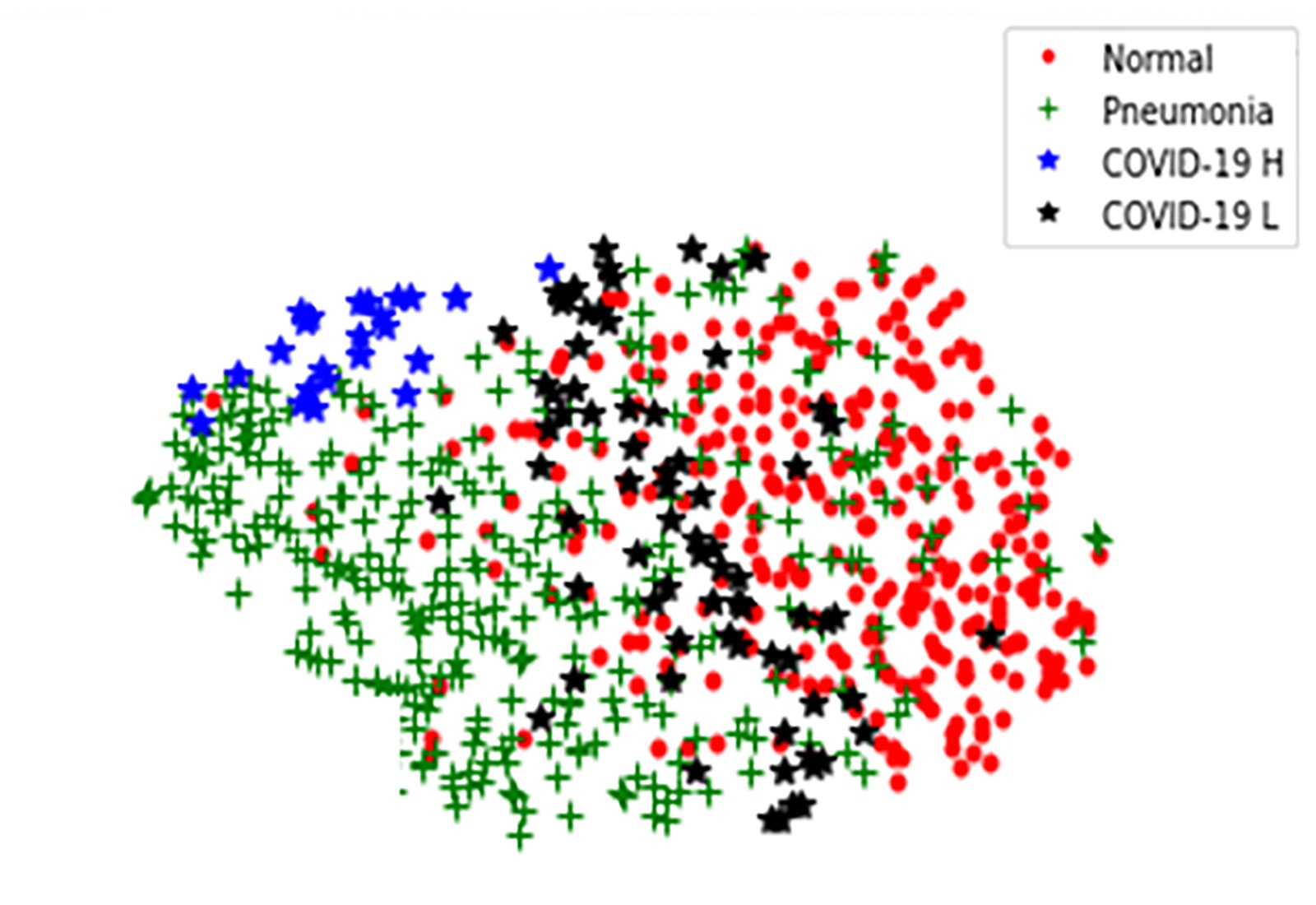 The work is based on a medical article by Dr. Luciano Gattinoni, who described the two conditions. Many COVID-19 cases show a familiar form of pneumonia, where the tiny sacs lining a patient’s lungs are stiff and heavy with fluid. The stiffness restricts breathing and prevents oxygen transfer to the bloodstream. Treatment for this form involves intubation with a mechanical ventilator, where a computerized machine controls the patient’s breathing. But more than half of the patients look more like an altitude-sick mountaineer: blood-oxygen levels are dangerously low, but the lungs work fairly well and breathing is nearly normal. Perversely, in these cases, mechanical ventilation can damage the lungs, exacerbating the disease. This second category demands a less invasive treatment under Dr. Gattinoni’s system, such as low-pressure oxygen, repositioning of the body, and the use of a sleep apnea device.

In another paper, published in late April, Gattinoni and his colleagues wrote: “The wide variation in mortality rates across different intensive care units raises the possibility that the approach to ventilatory management could be contributing to outcome.” In short, doctors should determine the correct category of symptoms before putting patients on mechanical ventilators.

Gattinoni has met some skepticism of the dichotomy. “We are in the era of individualized medicine,” Dr. Thierry Fumeaux, president of the Swiss Society of Intensive Medicine, wrote in an email. He said doctors are treating patients based on their unique set of symptoms, so a strong categorical distinction might not be clinically useful. But Fumeaux also deferred in the final analysis, pointing out that Gattinoni is the leading authority on acute respiratory distress syndrome.

While this argument may be important within the medical community, Fleischer believes that his technology is useful either way. Machine learning is key to the future of individualized medicine, and Fleischer’s X-ray analysis tool is one step along that path. Whether the conditions cited by Gattinoni are two distinct categories or two poles at each end of a smooth spectrum, doctors agree more information would be helpful in deciding whether to place a patient on a ventilator.

“If you can differentiate who’s a favorable responder and who isn’t,” Fleischer said, “whether you say it’s binary or continuous is almost beside the point. Even if it’s continuous, there’s benefit.”

Gattinoni has said that CT scans are currently the best way to reveal the lung patterns of the disease. But CT scans, which combine many X-ray images from multiple angles into a single picture, are time-consuming and very expensive. Even in well-heeled hospitals, the scanning procedure takes time to schedule and perform. For viral patients, transport to a tomography facility is hazardous both to them and to staff. When human resources are strained, as they have been in hospitals from Queens to Jakarta, these procedures are taxing. In many rural or developing areas, CT is simply not an option.

Artificial intelligence can help doctors make sense of data that is otherwise hard to interpret. “I’ve been working on machine learning primarily for physics,” Fleischer said. “Imaging through clouds, finding which way fluid will flow in turbulence, etc.” In work sponsored by DARPA and the Air Force, he developed AI to analyze noisy images, using algorithms to discover the underlying dynamical equations and predict future motion. Over the past decade he has used this expertise to develop advances in biomedical imaging, including ultrasound technology for ovarian cancer and foot sensors to spot the onset of diabetes.

As with his past biomedical innovations, the new COVID-19 tool is designed to process noisy and complex information and make it easier to interpret for clinicians in the field, who necessarily have to make decisions with imperfect data, sometimes under extreme duress. Fleischer hopes it can give doctors a higher level of confidence when choosing a patient’s course of treatment. And in the end, like his colleagues, he defers to the experts.

Considering both its caveats and its promise of better care, Fleischer offered advice to patients who may benefit from his technology.

“Listen to your doctor,” he said.