It was 7:30 on a recent Wednesday evening and nine freshmen were taking their seats in Room 121 of Forbes College while Szymon Rusinkiewicz, assistant professor of computer science, displayed their art projects for the week on a wide screen.

The students’ inspirations may have been great painters like Braque, Dali and Hockney, but their canvas was a computer and their palette Photoshop, version 8.0.

This freshman seminar, “Technology in Art and Cultural Heritage,” is no simple course in digital art. It explores how developments in science, technology and mathematics not only influence artistic styles but also, ultimately, shape our cultural heritage.

During this night’s session, the art critique was followed by a lecture on the physics of light, an art history lesson and a mini-tutorial on Rusinkiewicz’s own cutting-edge digital imaging research.

Sam Nicholson offered to be first for the critique. The assignment: Play with perspective, using Photoshop to combine multiple perspectives into one image.

“I photographed my roommate Andy in my dorm on my bed,” Nicholson explained. “It’s a simple picture; it gives you basic information – the bed, the room, the book.”

Nicholson commented that when he sees a two dimensional image like a painting, he wishes he could walk around it as if it were a sculpture and see what is on the other side.

“I wanted to provide in one single collage all the information that you would normally see only by looking from many different perspectives,” he said.

Next up was Elizabeth Kassler-Taub. Her subject was a corner of the Murray-Dodge Café. She combined eight different shots, cropping and erasing and making extensive use of Photoshop’s transparency feature.

“This is a great contrast from the previous image, isn’t it?” observed Rusinkiewicz (pronounced ROO-sheen-key-AVE-each). “That was all hard edges and this is about transparency and blurring.”

The rest of the work was as widely varied in subject and technique. Camila Chateau featured Nassau Street merging into Holder Courtyard, a giant giraffe wandering through the scene (shown below). In a sort of De Chirico meets Dali, Zach Ruchman merged skewed perspectives of Clio Hall, his friend Dora perching simultaneously in improbable places. Jacob Denz manufactured a Picasso-esque vision of his cello (“This image represents how I feel during orchestra rehearsals,” Denz quipped.) Jing Lin’s subject was a long corridor in Frist made to feel even longer through expert warping, merging and subtle color shifts.

The conversation turned to photographic manipulation. A student suggested that the digital age makes photography more suspect as a source of information. But Rusinkiewicz observed that even in the not-so-long-ago era of film photography, one could burn and dodge selectively to alter prints.

“Stalin was known for doctoring photos, for removing people who were no longer in favor,” noted Tim Weyrich, a computer science postdoctoral researcher who helps Rusinkiewicz teach the class.

Rusinkiewicz posed the next question: Do we appreciate different skills in digital artists than we appreciate in artists using traditional media?

“Yes, technology has changed art but in some ways it is the same as it was with pen and pencil,” said Kassler-Taub. “It still requires the same level of artistic vision.”

Moving to the lecture portion of the class, Weyrich started discussing the physics of light. “Light is a form of energy measured in joules,” he began, introducing an explanation of radiance, the primary type of light that a camera measures. He went on to explore vectors, dot products and cosines, unraveling the mathematical mysteries behind light and shadow.

“All that comes for free in reality,” concluded Weyrich. “But a painter or a computer scientist has to really think about it. The light in a room, simple as it may seem, takes a mind-boggling number of paths. Painters don’t do all the math; they developed their own heuristics.”

Rusinkiewicz retook the podium to deliver a talk on chiaroscuro, the painterly technique of contrasting light and dark. Starting in ancient Greece and moving quickly to Renaissance Italy, he concluded by telling the class about a discovery that he made just a couple of months ago, which builds on work he and graduate students presented in August at SIGGRAPH, the premier computer graphics conference.

Planning to make 3-D visualizations of some cave paintings in Wyoming, he combined into one image different digital photographs of the same paintings taken under different lighting conditions. What emerged serendipitously in the resulting digital image were cave paintings nearby that no one had known about; the stealth paintings revealed themselves magically when the digital images were merged.

“The image actually delivers more information to you than you would see with the naked eye,” Rusinkiewicz said.

This revelation seemed a metaphor for Rusinkiewicz’s class, which he hopes will deliver a greater appreciation of mathematics and computer science than is normally visible to nonscience students.

“It’s an opportunity to bring the computer science gospel to the wider world,” Rusinkiewicz said.

Class almost over, Rusinkiewicz passed out the new assignment: readings from Leonardo da Vinci. Next week the students would move from light and shadow to color and thus pick up another of Rusinkiewicz’s themes, exploring how modern technology has reshaped artistic traditions. “Let me know whether you buy da Vinci’s thoughts on color theory,” Rusinkiewicz instructed. “Is Leonardo right – or is he completely out of date?” 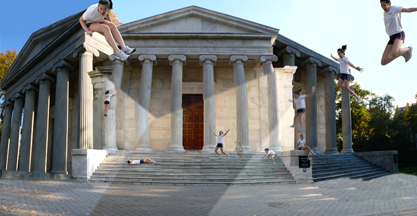 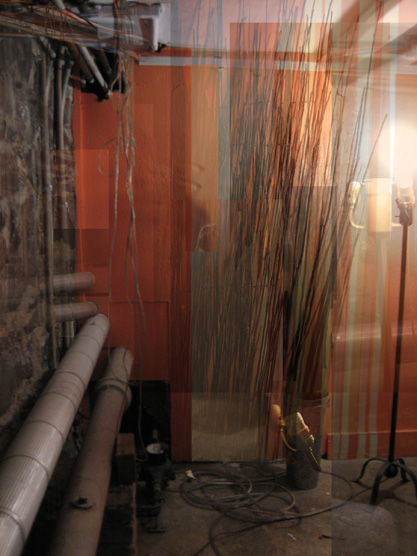