Princeton Engineering has established a new student group: the Wesley L. Harris Scientific Society, an organization devoted to encourage students from communities that are underrepresented in the sciences to pursue research careers.

The society’s namesake is the first African-American to get a Ph.D. in engineering from Princeton University. 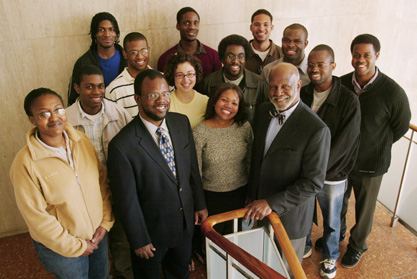 “Who better to name it after than Wesley Harris?” said William Massey, Edwin S. Wilsey Professor, Department of Operations Research and Financial Engineering, who founded the society. “He has a distinguished record in government, industry and academia. His career has been exemplary.”

One of the society’s main events this year is a leadership conference April 27-28 featuring distinguished African-American leaders in engineering, science, business, education, and policy.

“This is a precedent-setting conference,” said Harris, who will be a speaker. “Nothing like it has ever happened before and it will serve as an important model for other universities who, like Princeton, understand how crucial it is to engage minorities in science and engineering.”

Registration to the conference is free and open to the University community.

John Suarez, a second-year graduate student in electrical engineering and treasurer of the Wesley Harris Society, said that the group would be exploring not just technical issues but areas such as ethics and policy.

“We want to reach out to the other side of campus to people in the social sciences and humanities to try to communicate to them what is going on in engineering,” he said. “We need to have an understanding of the human condition in order to understand how technology affects people. We can achieve this by studying the humanities, and by interacting with those who are doing so.”

Harris, now Stark Draper Professor of Aeronautics at the Massachusetts Institute of Technology, said he was deeply honored to have the society named after him.

“I would have loved to have been a member of such a group when I was at Princeton,” said Harris, who received his Ph.D. in mechanical and aerospace engineering from Princeton in 1968. “I don’t recall actually meeting any other African Americans in the Engineering School during my time there.”

Harris is former dean of engineering at the University of Connecticut, former vice president and chief academic officer of the Space Institute at the University of Tennessee, and former associate administrator for aeronautics at NASA. This year the National Academy of Engineering named Harris to an international committee charged with identifying the greatest challenges and opportunities for engineering in the 21st century.

Harris also serves on the leadership council for Princeton’s School of Engineering and Applied Science.

“I have already met with some exciting young people who have very creative ideas about engineering and who are very motivated toward research careers at places like Princeton and MIT,” said Harris. “The society adds value to Princeton and will be a motivating factor in the careers of young people.”