The electronics industry has pushed the capabilities of silicon — the material at the heart of all computer chips — to its limit, and one intriguing replacement has been carbon, said Stephen Chou, professor of electrical engineering. A material called graphene — a single layer of carbon atoms arranged in a honeycomb lattice — could allow electronics to process information and produce radio transmissions 10 times better than silicon-based devices. 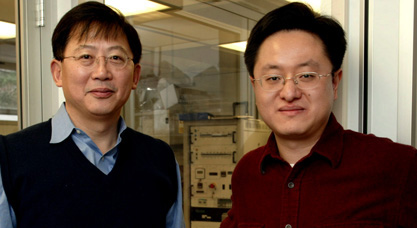 Until now, however, switching from silicon to carbon has not been possible because technologists believed they needed graphene material in the same form as the silicon used to make chips: a single crystal of material eight or 12-inches wide. The largest single-crystal graphene sheets made to date have been no wider than a couple millimeters, not big enough for a single chip. Chou and researchers in his lab realized that a big graphene wafer is not necessary, as long they could place small crystals of graphene only in the active areas of the chip. They developed a novel method to achieve this goal and demonstrated it by making high-performance working graphene transistors.

“Our approach is to completely abandon the classical methods that industry has been using for silicon integrated circuits,” Chou said.

Chou, along with graduate student Xiaogan Liang and materials engineer Zengli Fu, published their findings in the December 2007 issue of Nano Letters, a leading journal in the field. The research was funded in part by the Office of Naval Research.

In their new method, the researchers make a special stamp consisting of an array of tiny flat-topped pillars, each one-tenth of a millimeter wide. They press the pillars against a block of graphite (pure carbon), cutting thin carbon sheets, which stick to the pillars. The stamp is then removed, peeling away a few atomic layers of graphene. Finally, the stamp is aligned with and pressed against a larger wafer, leaving the patches of graphene precisely where transistors will be built.

The technique is like printing, Chou said. By repeating the process and using variously shaped stamps (the researchers also made strips instead of round pillars), all the active areas for transistors are covered with single crystals of graphene.

“Previously, scientists have been able to peel graphene sheets from graphite blocks, but they had no control over the size and location of the pieces when placing them on a surface,” Chou said.

One innovation that made the technique possible was to coat the stamp with a special material that sticks to carbon when it is cold and releases when it is warm, allowing the same stamp to pick up and release the graphene.

Chou’s lab took the next step and built transistors — tiny on-off switches — on their printed graphene crystals. Their transistors displayed high performance; they were more than 10 times faster than silicon transistors in moving “electronic holes” — a key measure of speed.

The new technology could find almost immediate use in radio electronics, such as cell phones and other wireless devices that require high power output, Chou said. Depending on the level of interest from industry, the technique could be applied to wireless communication devices within a few years, Chou predicted.

“What we have done is shown that this approach is possible; the next step is to scale it up,” Chou said.