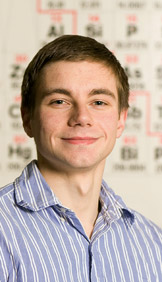 As a chemical”>http://chemeng.princeton.edu/index.shtml”>chemical engineering major, James Morrison has earned the top ranking in the department and a reputation among his professors as one of the most impressive students they have taught at Princeton.

But it is Morrison’s love of Latin that will be highlighted at Princeton’s Commencement ceremony on June 3, when he will deliver the traditional Latin address as the salutatorian of the class of 2008.

From exploring political themes in Roman poetry to experimenting with potential advances in nanoelectronics, Morrison has tackled an array of intellectual challenges over the past four years — just what he envisioned when deciding to attend Princeton.

“I ended up choosing Princeton because it offered me a wider variety of experiences and a liberal arts education even though I would be studying engineering,” he said.

Morrison, who is from Kensington, Md., has taken courses in 12 departments and programs. A student of Latin throughout middle school and high school, he continued that path by taking five courses in classics“>http://www.princeton.edu/~classics/“>classics at Princeton, engaging his particular interest in Roman literature — all while majoring in chemical engineering and pursuing a certificate in engineering physics.

“There is a common thread of puzzle-solving, in that decoding a physical problem is somewhat the same idea as decoding a Latin text,” Morrison said. “But ultimately I think they are a very good complement, because it uses different parts of your brain to engage a more artistic side as opposed to a very quantitative side.”

Andrew Feldherr, an associate professor of classics, taught Morrison in courses on the poet Horace and on Roman civilization. Noting that Morrison demonstrated “flawless Latin” in his upper-level course on Horace, Feldherr said, “I was impressed not only with James’ overall mastery of the material, but also with his thoughtfulness about how to interpret it.”

For that course, Morrison wrote an original political interpretation of one of Horace’s odes that Feldherr called “probably the single best idea on a piece of Latin literature that I have heard from an undergraduate in 10 years of teaching here.”

Morrison earned similar praise from faculty in the chemical engineering department, where he earned the highest ranking in the class on the strength of A+ grades in more than half of his courses.

“James is one of the most outstanding students I have encountered during my 16 years of service at Princeton,” said Ilhan Aksay, professor of chemical engineering. “During the last four years, he worked in my group on various research projects. On all projects, he excelled and produced impressive results.”

Pablo Debenedetti, the Class of 1950 Professor in Engineering and Applied Science, added that Morrison “is one of the five best undergraduates (out of a total of approximately 600) that I have taught in my 23 years at Princeton. He is truly off-scale.”

As a sophomore, Morrison took a course on thermodynamics with Debenedetti, in which “he demonstrated superior mastery and understanding of this complex and challenging subject, and excelled in every aspect of the course,” Debenedetti said. “His questions, both in class and during office hours, and the overall quality of his work revealed a truly unusual appreciation for the nuances and subtleties of thermodynamics.”

Morrison excelled the next year in a graduate-level course on that subject with Debenedetti, who also co-advised Morrison on his senior thesis project along with Aksay.

In his thesis, which involved theoretical and experimental research, Morrison investigated methods for patterning surfaces with very small particles, which could ultimately have applications in nanoelectronics.

For Morrison, this project capped an academic journey that more than lived up to his expectations of Princeton.

“I will remember the amazing intellectual experience that I had here — having outstanding researchers talk with me and teach my classes. I will remember the ability I’ve had to do independent work in chemical engineering, which has been very rewarding,” Morrison said. “And I will remember, certainly, the personal relationships that I’ve had with my friends.”

Morrison earned the Shapiro Prize for Academic Excellence, was elected to Phi Beta Kappa and served as vice president of Princeton’s chapter of the Tau Beta Pi engineering honor society. Outside the classroom, he sang bass in the Chapel Choir for four years, performing solos in Bach’s “Magnificat” and Mozart’s “Requiem” this year. After graduation, he will work in quantitative finance for Goldman Sachs in New York City, and he may pursue graduate studies in applied physics in the future.

“He is, in short, one of a kind: a deep thinker and an extraordinarily gifted and creative individual,” Debenedetti said.