Princeton University students traveled to Huamanza√±a, Peru, this summer to install wood-burning stoves in 35 homes. The stoves, developed by the students, will replace open-pit cooking fires, which fill the homes with smoke and cause respiratory illnesses.

The effort is one of three projects of the Princeton chapter of Engineers Without Borders, a non-profit organization that partners with developing communities throughout the world to improve quality of life through sustainable engineering initiatives. 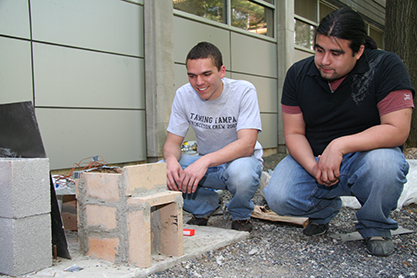 In addition to the ongoing work in Peru, which began with the construction of a community bathroom facility in 2005, Engineers Without Borders-Princeton established a partnership with the village of Kumudo, Ethiopia, in 2006 and launched a project this year just outside Accra, Ghana.

In Ghana, the group plans to construct sanitation facilities at a school in Ashaiman and build an additional school as part of a sustainable community project spearheaded by geosciences professor Gregory van der Vink.

“There are so many aspects to what students learn from these experiences,” said the group’s faculty adviser George Scherer, the William L. Knapp ’47 Professor of Civil Engineering. “All the projects have been initiated by the students, so they learn to take charge and organize complicated tasks and use their technical skills. At the same time, it takes a lot of sensitivity to adapt to other communities and make sure that the projects are what the community members want and need.”

The group is eagerly looking forward to the 2008-2009 academic year, when the founding president of Engineers Without Borders–USA, Bernard Amadei, a professor of civil engineering at the University of Colorado-Boulder, will begin a visiting professorship at Princeton’s Keller Center for Innovation in Engineering Education.