Attaining independence from one's parents is an enduring theme in the lives of many organisms. Birds must fly the nest, just as mammals must wean off their mother's milk. Now a study from Princeton researchers sheds light on a similar sort of separation drama that unfolds almost from the moment life begins, and long before an animal is born or hatches from an egg.

Ken Anderson runs a lively classroom. He dashes readings off the syllabus and adds new ones, invites impromptu visitors, punctuates lessons with anecdotes, and favors discussions over formal lectures. It is in service of his foremost theme: maintaining a human element in design.

Anderson, a principal researcher at Intel, is spending this year as the James Wei Visiting Professor at Princeton’s Keller Center for Innovation in Engineering Education. Although based at one of the U.S.’s premier technical companies, Anderson’s specialty is in anthropology and ethnography rather than electrical engineering. He encourages his students to explore ways that their technical innovations will affect society and to better understand the people ultimately influenced by their designs.

“We’re trying to keep people at the center of the design process,” Anderson said. He explained that “wicked problems” are intractable global issues that defy solution but can be mitigated. 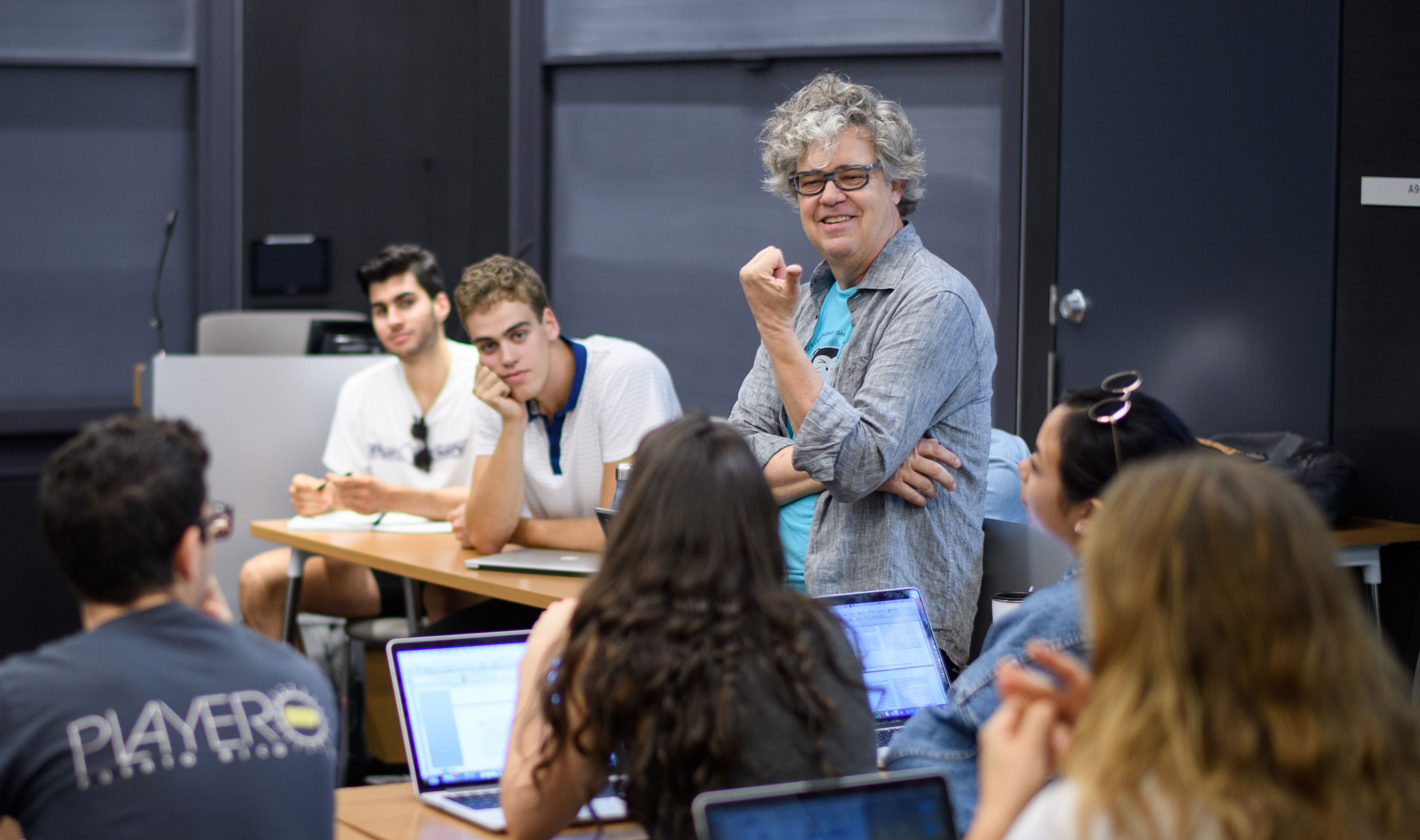 Anderson’s fall semester course, “Ethnography and Wicked Problems,” is cross-listed with engineering and anthropology. It offers students a set of research skills that operate at the border of design and social science. Much of the work “is all about being in the context and talking with people, trying to understand them at some greater depth than just walking by or casually glancing at their lives,” Anderson said.

Students seem to welcome the novelty of Anderson’s approach and commend his from-the-hip teaching style.

“Ken’s breaking rules. Classes are not structured in the traditional way,” said Diego Negr√≥n-Reichard, a senior concentrating in the Woodrow Wilson School of Public and International Affairs. “Lectures become discussions, and everyone has a worthy perspective to contribute. His teaching style is incredibly personal. He’s able to weave in anecdotal evidence to support these larger theories of anthropology we discuss. I chose the course because of Ken’s background. I thought it was a unique opportunity to learn from an expert in the field.”

The 18 students in the course work to get deeper into the lives of those who could be affected by their proposals. They draft “day-in-the-life” scenarios, and interview people in their communities.

Among the wicked problems Anderson and the class are focusing on are consumption and its impacts on climate change, and the tension between privacy and security.

There are no prerequisites for the course. The students are from departments as diverse as anthropology, computer science, and French and Italian, and span all four class years. 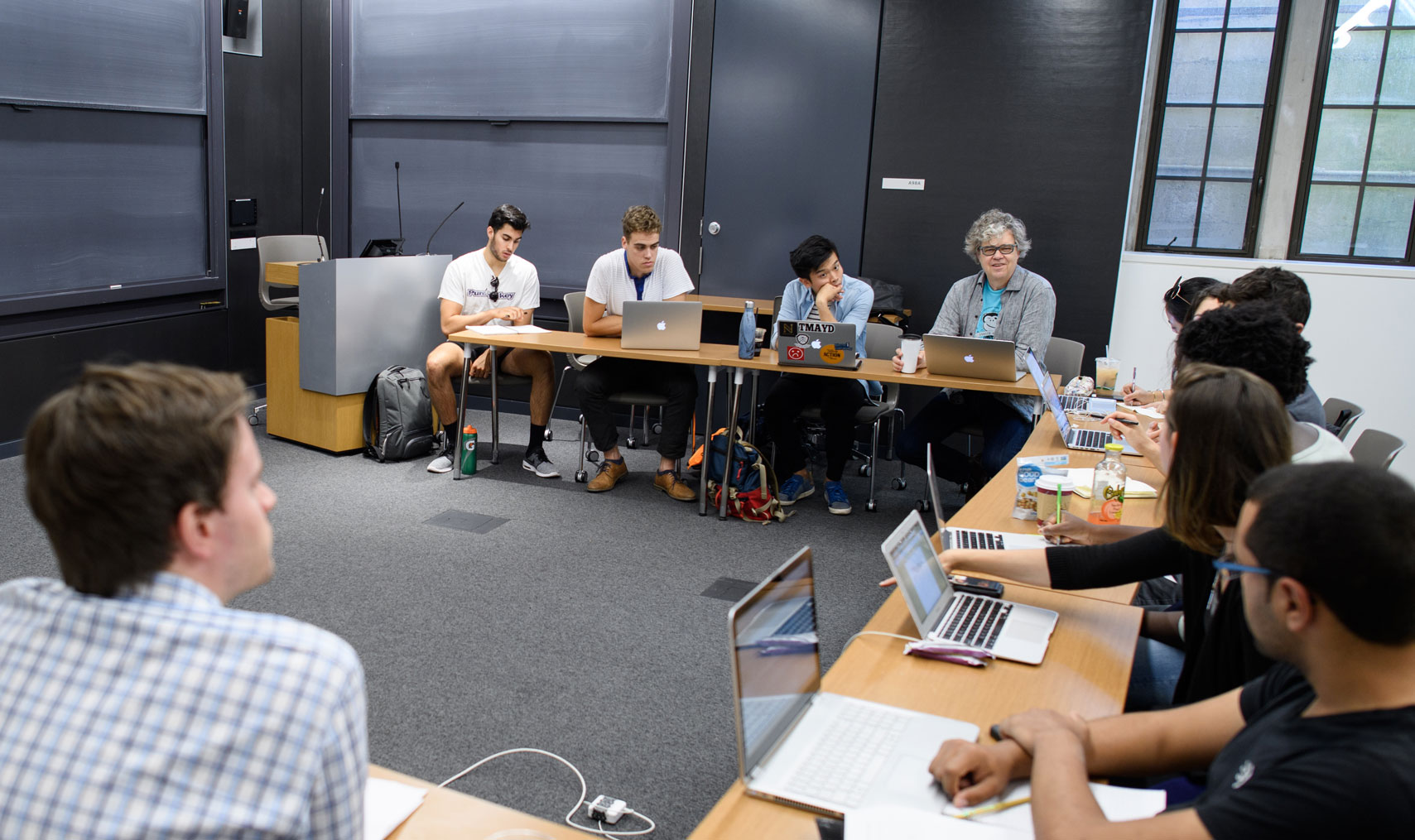 the practical ends of anthropological research are not hypothetical or abstract,” said Kelly McKowen, a doctoral student in anthropology who is a teaching assistant for the course. “When he’s talking about developing products based on participant observation or pitching new services based on ethnographic interviews, he’s drawing on experience from firms like Apple and Intel. That, of course, means that the material isn’t always neatly packaged in lectures. Rather, he shares stories and cases, and works to make our time in class a generative dialogue.”

Anderson was trained as an anthropologist, with degrees from Bethel College and Brown University, and conducted field research before he entered the corporate world. He started with Apple as an in-house anthropologist in 1992, and has also worked at AT&T. He has been with Intel since 2001. He is co-founder of Ethnographic Praxis in Industry (EPIC), which focuses on the intersection of cultural anthropology and business.

Anderson first came to Princeton a year ago to give a well-received Keller Center lecture on anthropology at Intel.

“I’ve gone to other anthropology departments and everybody wants to talk about ethics; how can you work for that large corporation? And so for them, going to a large corporation is a sellout,” Anderson said. “What’s interesting about Princeton is there’s a lot more interest in, ‘Help me understand what you do,’ rather than being critical of what I do. And that in and of itself was super-interesting for me.”

Anderson hopes that, by the end of the semester, his students will have a deeper range of tools with which to approach the grueling problems they will face in the future. Through the Keller Center courses, he said, students will learn how to lead, pitch ideas and seek solutions based in human behavior.

Rebecca Kahn, a senior majoring in sociology, said this is the very outcome she is seeking.

“When things are woven into your existence, they’re hard to analyze,” Kahn said. “This is where this class comes in. It is teaching us to analyze everyday life and make society better through design. I came to campus having never heard of social innovation, design-thinking or even ethnographic research, and I’m so glad I stumbled upon it.”