The researchers in Princeton's Complex Fluids laboratory are sometimes inspired by a cup of coffee or a permanent marker.

Such everyday items may seem like odd subjects of inquiry in a lab known for its cutting-edge research, but in fact the coffee – a latte actually – acts as a model system to study pattern formation in liquids, which could lead to applications in food science, and the permanent markers may suggest ways to transfer patterns of micro-fabricated electronics from one surface to another.

These seemingly unconnected experiments are tied together by the study of fluids and how they move and change in space and over time. At the head of the lab is Howard Stone, a professor in the School of Engineering and Applied Science, whose mentorship of graduate students and postdoctoral researchers has led to a multitude of papers on topics that have the potential to address societal problems, from coping with climate change to purifying water using the technology that adds fizz to soda.

“I encourage the members of my lab to do things that excite them, things they’re very curious about,” said Stone, Princeton’s Donald R. Dixon ’69 and Elizabeth W. Dixon Professor and chair of the Department of Mechanical and Aerospace Engineering. “It is a little different than how other groups sometimes run, and in part that’s because I’m not focused on trying to solve only one problem. Instead I am serious about seeking new understanding as well as potential applications.”

Stone’s lab attracts students and postdoctoral researchers from around the world, with backgrounds ranging from chemistry and math to physics and engineering. These scholars combine their talents with a lot of energy, laboratory camaraderie and a spirit of exploration, turning creativity into results that have the potential to make a difference in areas such as health and the environment. 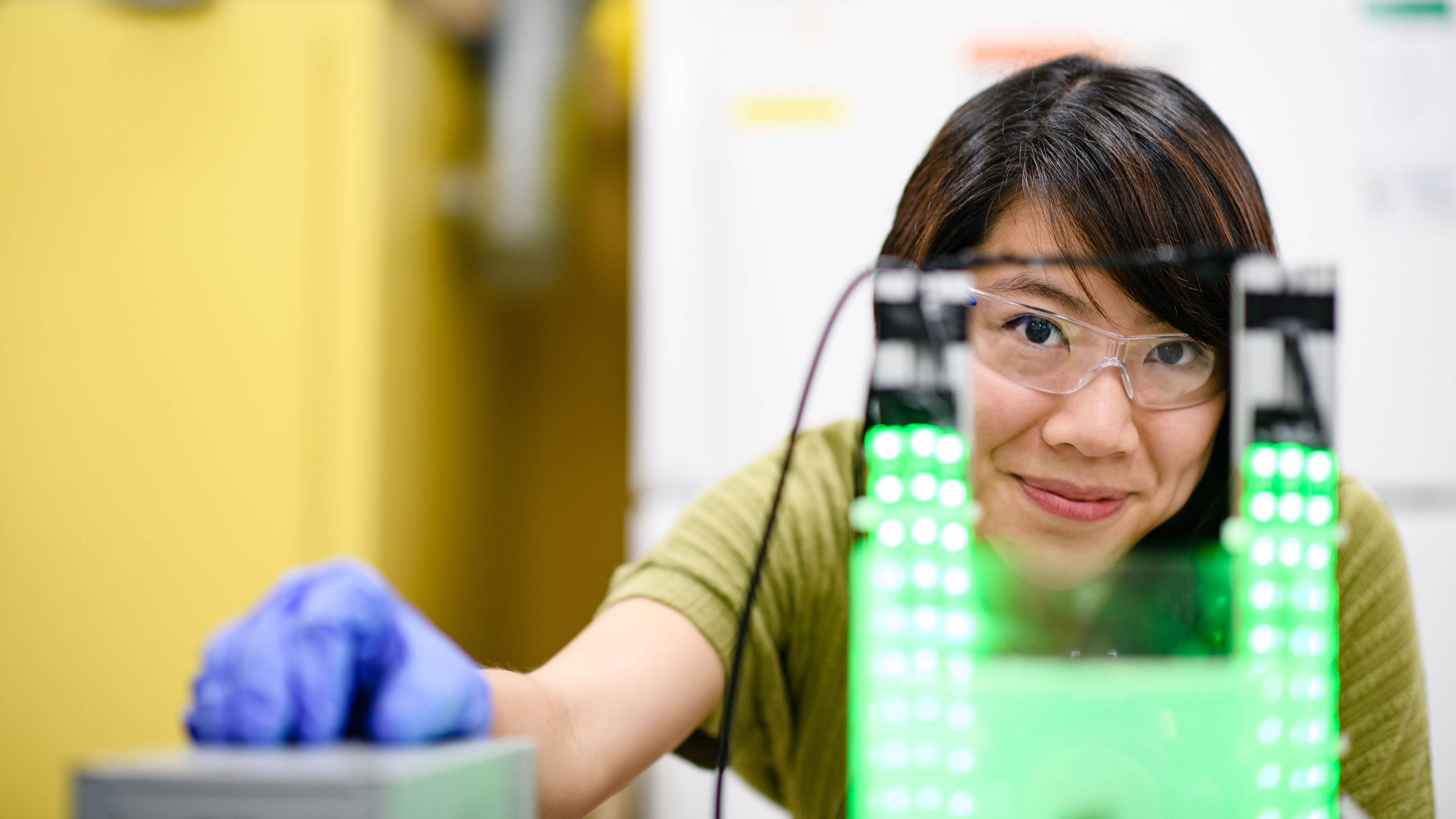 Ching-Yao Lai recalls the first time she heard the term “fracking” as a newly arrived graduate student from Taiwan five years ago. “I had absolutely no idea what that was,” she said. She soon became immersed in studying hydraulic fracturing, which involves injecting high-pressure liquids into underground rock to generate fractures that allow oil and gas to come to the surface. But the liquid can also bring contaminants – such as brine, naturally occurring radioactive material and metals – into contact with underground drinking water sources.

“It’s very important to know how fast a fracture grows and how far it can go,” Lai said. To study this, she uses a substance that bears little overt resemblance to rock: a block of gelatin.

Gelatin mimics the brittle and elastic properties of rocks, and it is convenient in other ways. It is transparent, so Lai and her co-investigators can see what happens to the liquid and where it goes.

To model fracking in the cube of gelatin, the researchers poke cracks in the springy solid to represent the fissures and faults in the Earth. Then they push mineral oil through the cracks and, while shining a green light on the block to illuminate the spread of the oil, take photos for later measurements of the size and extent of the cracks.

With this experimental system, Lai and colleagues are exploring what happens to liquid injected into the gelatin. Some of the questions are why not all of the injected liquid comes back to the surface, and how much fluid gets trapped in various types of fractures.

One of their next areas of study involves an entirely different type of liquid – foam. Lai is exploring whether foam could be use in place of today’s high-pressure liquids. Foam uses 90 percent less water and may be less likely to travel to groundwater sources. 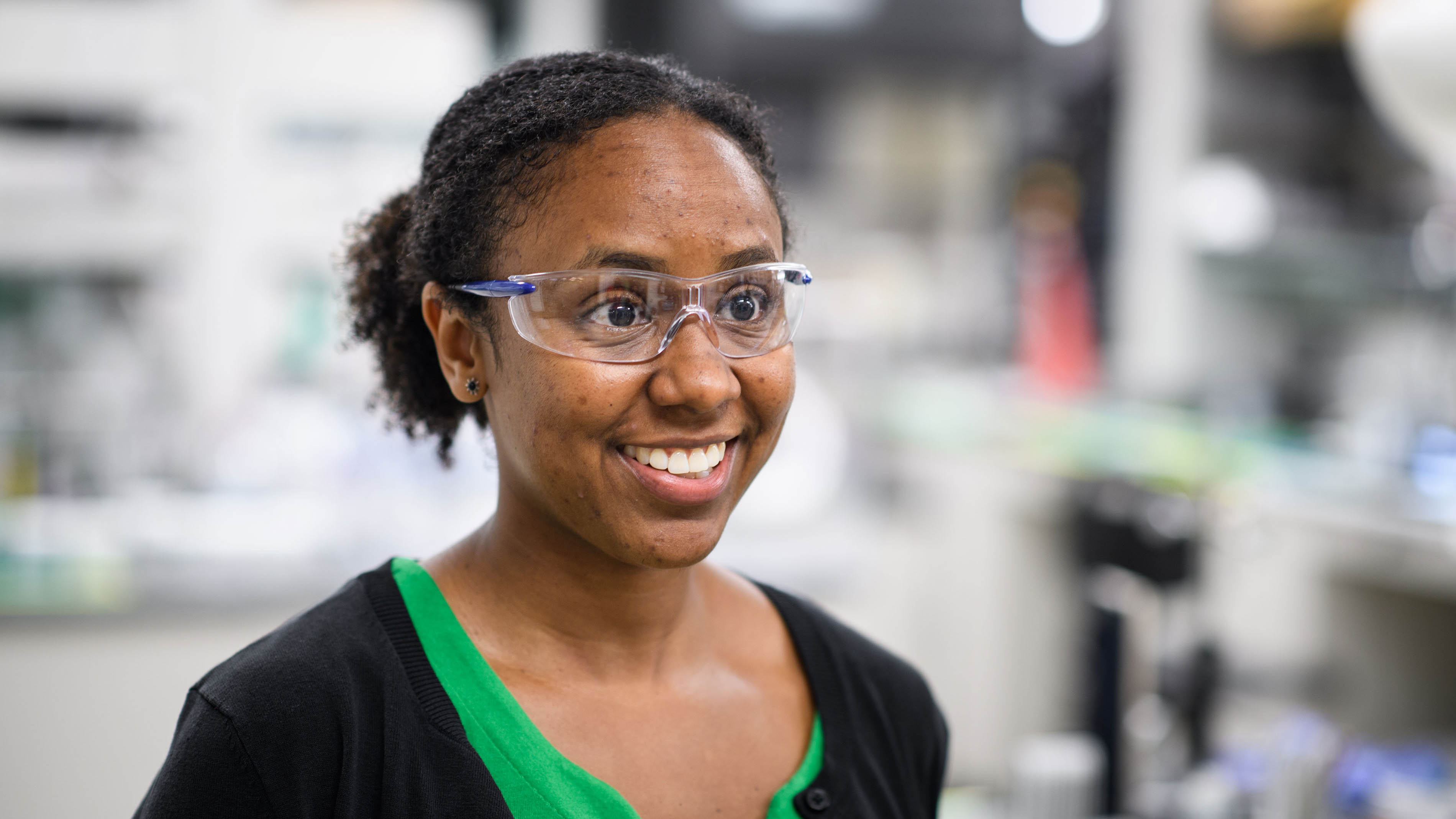 At the next lab bench over, Janine Nunes holds a vial of tiny polymer fibers that could someday become wound-healing bandages or provide scaffolding for repairing damaged tissues in the body. Nunes is developing liquids that solidify into small fibers. These fibers could be injected into a damaged part of the body where they then tangle to provide a scaffold on which cells can regrow.

Nunes, an associate research scholar, makes the slender fibers using a device that works sort of like a pasta maker and that fits in the palm of her hand. She injects a polymer liquid into a slender pipe. Then, by sending pulses of ultraviolet light into the device, she converts the light-sensitive liquid into a hair-thin, solid fiber.

By changing the duration of light pulses, Nunes can control the shapes of the fibers. She and Antonio Perazzo, a postdoctoral research associate, found that longer fibers are more likely to entangle, creating a semisolid gel, while the shorter fibers stay suspended in the liquid.

The microfluidic device produces one fiber at a time, but the team plans to improve the process to churn out many fibers at once. She is also exploring what would happen if she mixes in ingredients that make the gel degradable, to make tissue scaffolding or internal bandages that can biodegrade when they are no longer needed.

Outside the glass doors of the lab, postdoctoral research associate Bhargav Rallabandi sits across from a whiteboard filled with geometrical figures and equations, the evidence of a day in the life of a theorist. Rallabandi’s latest project is a theoretical model of the formation of Arctic ice bridges.

Ice bridges form when chunks of ice, flowing through a narrow strait between two bodies of land, form a clog. The bridges can prevent ice from flowing south and melting due to warmer temperatures, and mayalso enable polar bears to reachtheir hunting grounds.

Using pen and paper, and later, computer simulations, Rallabandi calculated the critical thickness, wind speed and ice compactness necessary for ice bridges to form. The team found that the formation of ice bridges can be understood as a balance between wind stresses that drive motion and frictional stresses in the ice that resist motion. These frictional stresses arise from the motion of ice floes relative to each other and to the land boundaries of the strait. The results were published earlier this year in the journal Physical Review Letters.

“This gives you a way to think about what factors we need to measure in the Arctic to predict ice bridge formation,” Rallabandi said. Now that he figured out howice bridges form, he plans to tackle the other side of the question: How do they break up? 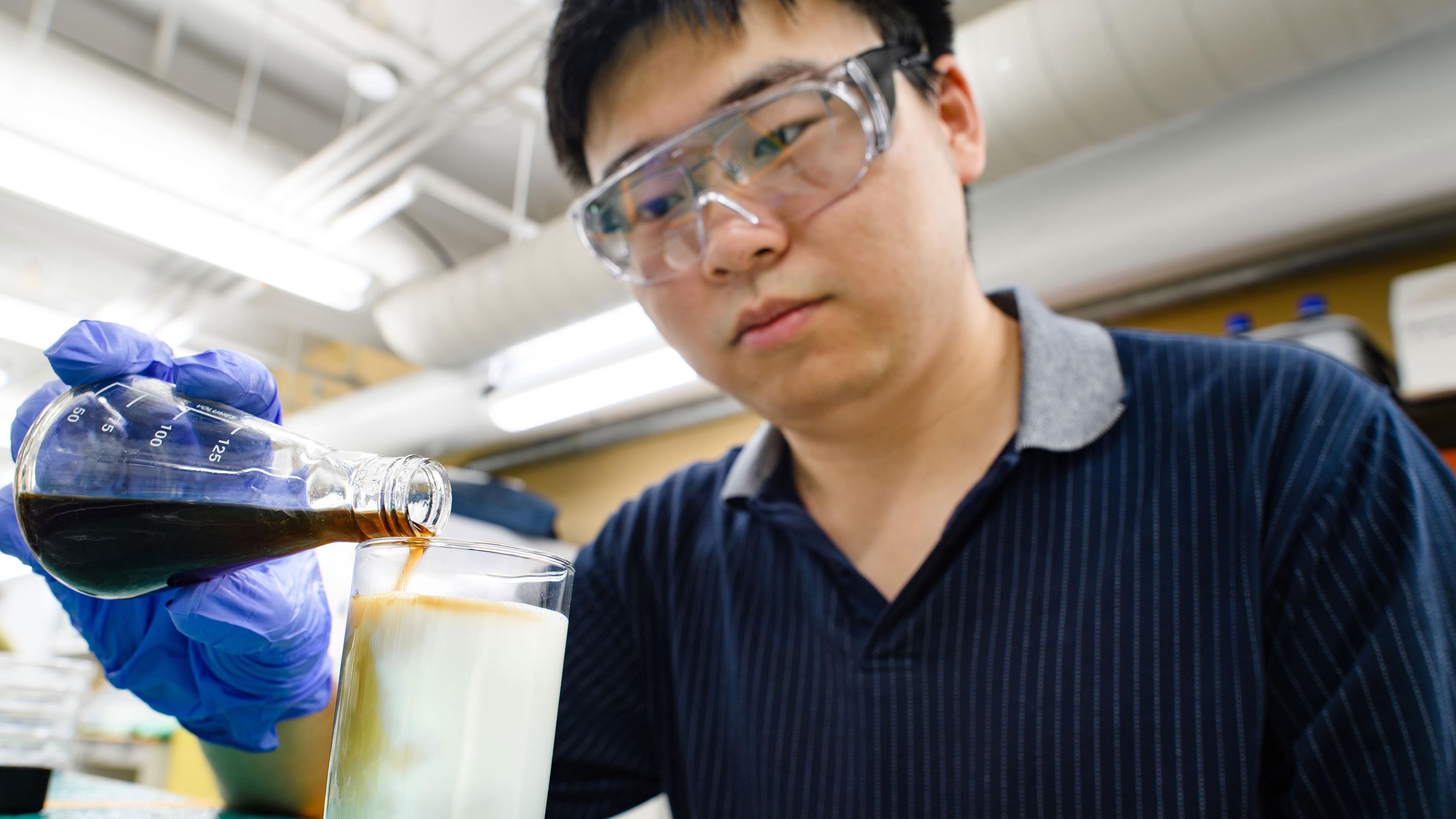 When Nan Xue joined the lab as a new graduate student last year, the first thing he did was buy a coffee machine, and it wasn’t to stay awake. He needed to brew a lot of the stuff for his studies on how two liquids – in this case, coffee and milk – can settle into layers. What he finds could have applications for food science or improving personal care products.

The idea for the study originated with the observation that pouring hot coffee into warm milk leads to the formation of layers that are progressively darker from the top of the cup to the bottom. “In the beginning, we thought maybe this was something related to the oil particles in the milk or the foam,” said Xue. “That was totally wrong.”

Coffee is less dense than milk, so, in the absence of stirring, it normally floats atop the milk. Making a latte, however, involves pouring hot coffee into a cup of warm milk, forcing coffee to the bottom where it slowly separates into regions of different coffee-to-milk ratios. The liquid at the exterior of the cup is slightly cooler than the liquid in the interior, and cooler liquids are denser, so this liquid sinks until it is stopped by a section of denser coffee-milk. Over several minutes, these processes lead to the formation of layers.

Xue found that a large factor dictating the layering was speed. When he poured the coffee quickly into the milk, the layers formed, but when he poured slowly, no layering occurred. Xue and his colleagues developed a model system to show how the layers form, and they are now exploring the effects of volume, speed and density differences on the pattern formations. The team has also created a material that gels to form a solid containing these layers.

The layered lattes are not the only example of an everyday observation that became a research question. Sepideh Khodaparast, a postdoctoral research associate, was working with bacteria when she noticed something curious.

Khodaparast was studying the slimy bacterial films that adhere to surfaces and can contaminate medical tubing, stents and implants. In her primary research, she investigates how the interfaces between air and water, such as those that occur in bubbles, can be harnessed to remove pathogenic bacterial cells from different surfaces. She has found that bubbles are highly effective at preventing the formation of more mature layers of bacteria.

One day she was trying to remove bacteria from a glass surface, which was labeled with permanent marker ink, when she observed that, under the right conditions, dipping the slides in water caused the ink to slip off the slides and onto the surface of the water with the words intact.

With further investigation, Khodaparast and Fran√ßois Boulogne, a former postdoctoral researcher who is now at Paris Saclay University in France, found that when they quickly dipped the glass into a tub of water, the words did not peel off. But if they did it slowly, the words slid off and floated on the water. “This mechanism could be useful for removing water-resistant stains and transferring thin elastic films, patterned with micro-fabricated electronics, from one surface to another,” Khodaparast said.

The broad range of inquiry in the lab has produced numerous technologies with the potential to benefit society. Early this year, the group published a study showing that carbon dioxide gas —

the substance that gives soda its fizz – can remove contaminating particles from water, suggesting a low-cost, low-energy water treatment system.

“You could potentially use this to clean water from a pond or river that has bacteria and dirt particles,” said Sangwoo Shin, who performed the research as a post-doctoral researcher in the laboratory and is now an assistant professor of mechanical engineering at the University of Hawaii at Manoa. The study was published in 2017 in Nature Communications.

By bringing together talent from around the globe in the form of postdoctoral fellows, graduate students and undergraduates, and letting the ideas flow, Stone and the Complex Fluids Group are making new discoveries while also probing deeply to understand fundamentals. As mentor to this diverse team of early-career scientists and engineers, Stone is modest when it comes to taking credit for their accomplishments. Instead, he said, “I am incredibly lucky to work with such smart, talented, hard-working and kind people.”