Dean Emily A. Carter opened the School of Engineering and Applied Science's 2019 class day ceremony by calling on graduates to apply the knowledge they gained at Princeton in service to society.

“We need you,” Carter, the Gerhard R. Andlinger Professor in Energy and the Environment, told students gathered in the Friend Center courtyard for the June 3 event. “This country needs every engineer and scientist to work on the problems that face the nation, and that face humanity and the planet.” 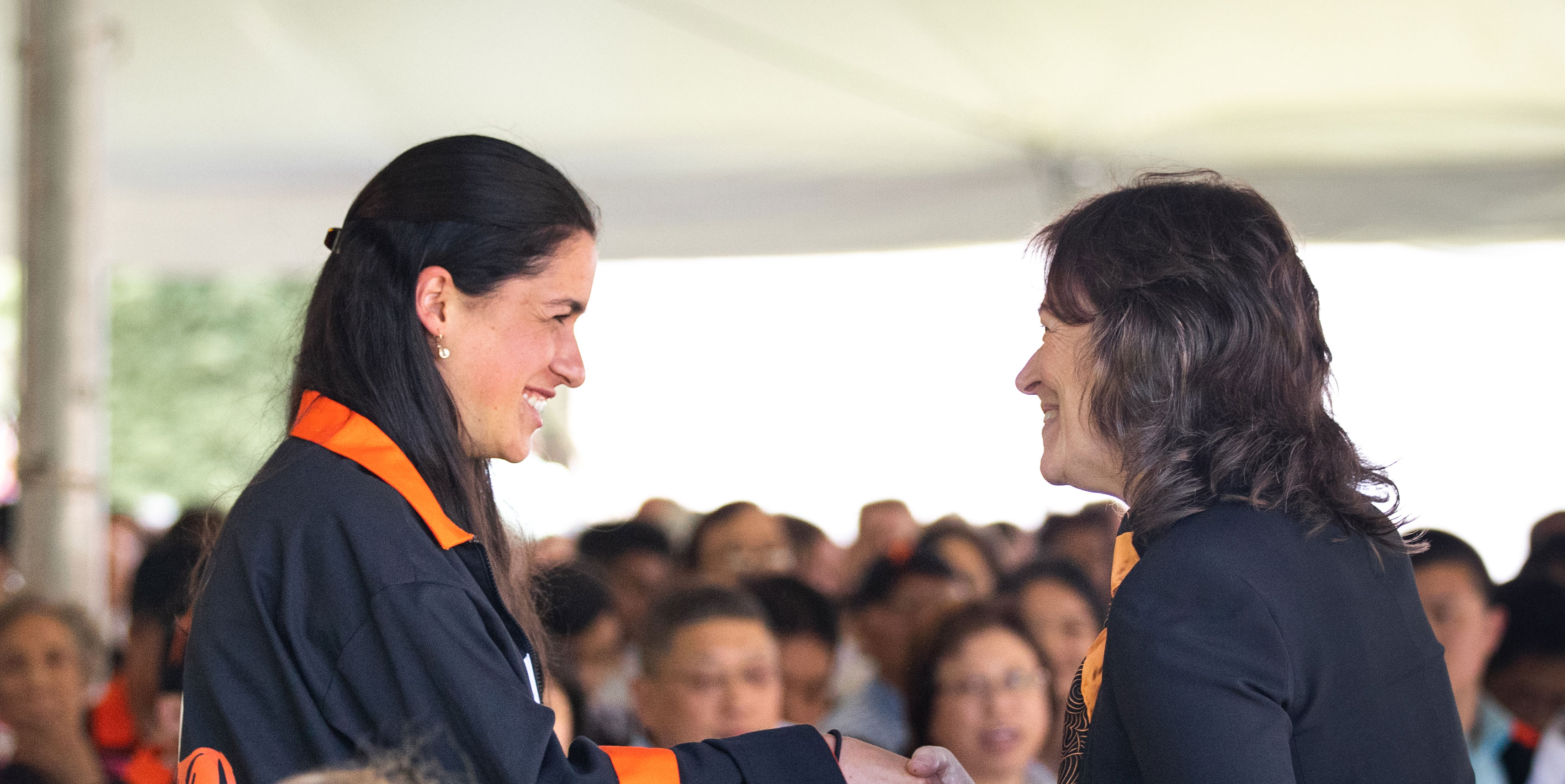 Carter said members of the faculty were truly impressed by the engineering Class of 2019. With 329 graduates receiving engineering degrees and 32 receiving bachelor of arts degrees in computer science, the class included 361 students, which represents 28 percent of the Princeton class. She said members of the class had participated in athletics, dance, musical and theatrical performances, had made scientific discoveries and novel technological advances and had served the University and wider community through volunteer work.

“You have done outstanding work during your time at Princeton,” she said.

“I expect that you entered the school of engineering and applied science with a deep curiosity of how physical, living and information systems work,” Carter said. “I expect you are leaving not only with your curiosity intact but also with a confidence that you can put what you have learned here to good use for humanity and the planet.”

The winners of major awards at the 2019 Princeton Engineering Class Day, as presented by Associate Dean for Undergraduate Affairs Peter Bogucki, were: 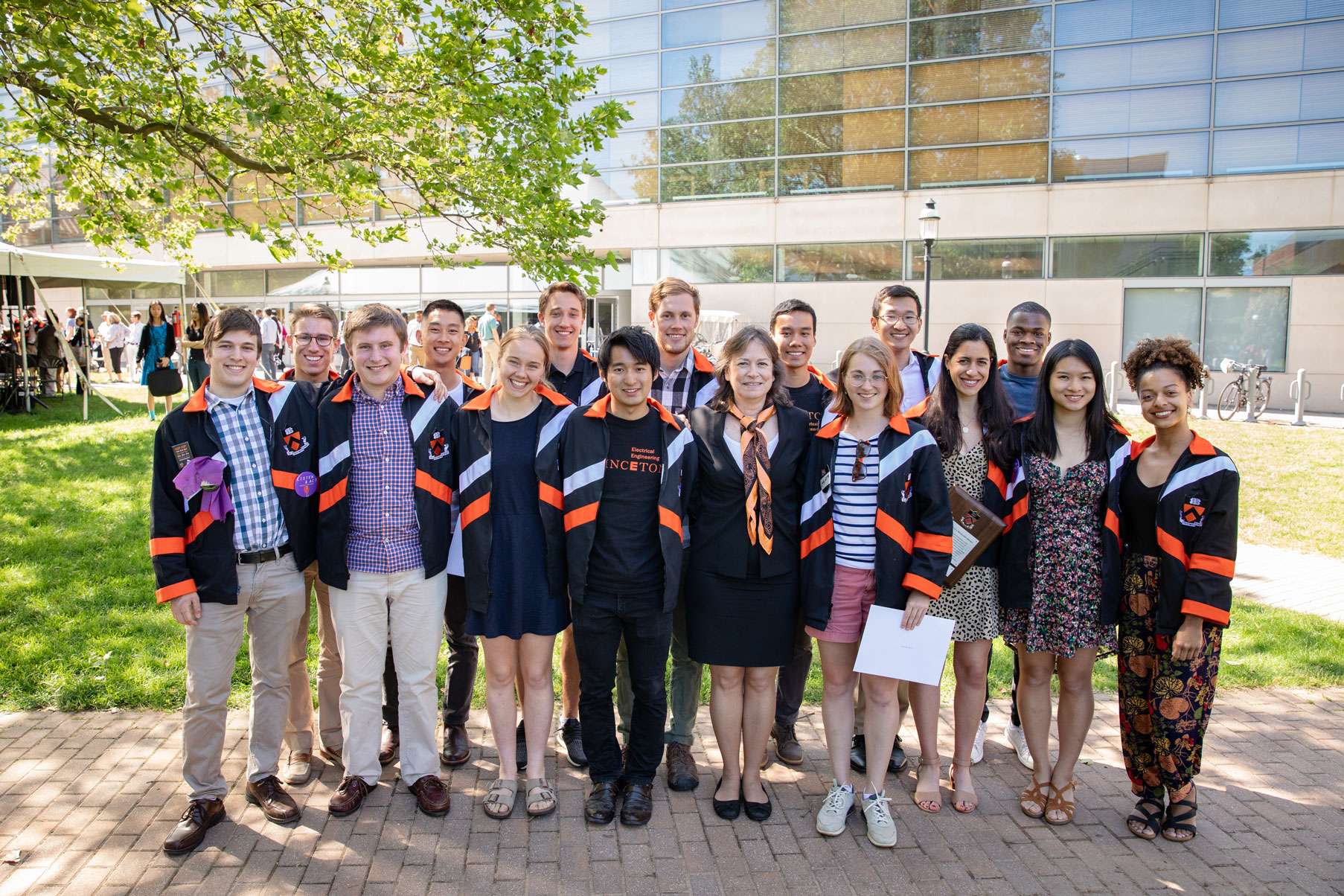 A mechanical and aerospace engineering major with a certificate in the history and practice of diplomacy, Hsia conducted research for his senior project along with classmate Will Hess; they developed algorithms for estimating the dynamics of an aircraft for use in an autopilot systems. Hsia, of Boston, MA, will enter the United States Air Force as a pilot candidate officer.

A civil and environmental engineering major with a certificate in urban studies, Wesley’s senior thesis analyzed structural mechanisms of traditional Japanese pagodas that have withstood centuries of earthquakes due to their flexible structures. The work showed how her findings are applicable to modern structures. Nyema, of Somerset, NJ, will work as an engineer at Silman.

An electrical engineering major with certificates in engineering physics and in materials science and engineering, Sekine’s senior thesis focused on the formation of defects at the interface between silicon and silicon dioxide in semiconductors, which need to be controlled at the level of individual electrons in quantum computing applications. He also developed technology to reduce the defects. Sekine also was head of the electrical system team for Princeton Racing Electric. Sekine, of Chiba-Shi, Japan, will pursue a Ph.D. in electrical engineering at the California Institute of Technology.

A mechanical and aerospace engineering major with certificates in applications of computing and in robotics and intelligent systems, Fierros played a key role in engineering tours, department open houses, forums and other activities. The dean of Rockefeller College, Justine Levine, described Fierros as the “sort of person who supports peers behind the scenes, and you’d never know it because of his humility and generous spirit.” His thesis involved building a robotic system to observe how biological tissues respond to strain. Fierros, of Havertown, PA, will work as a software engineer at iRobot. 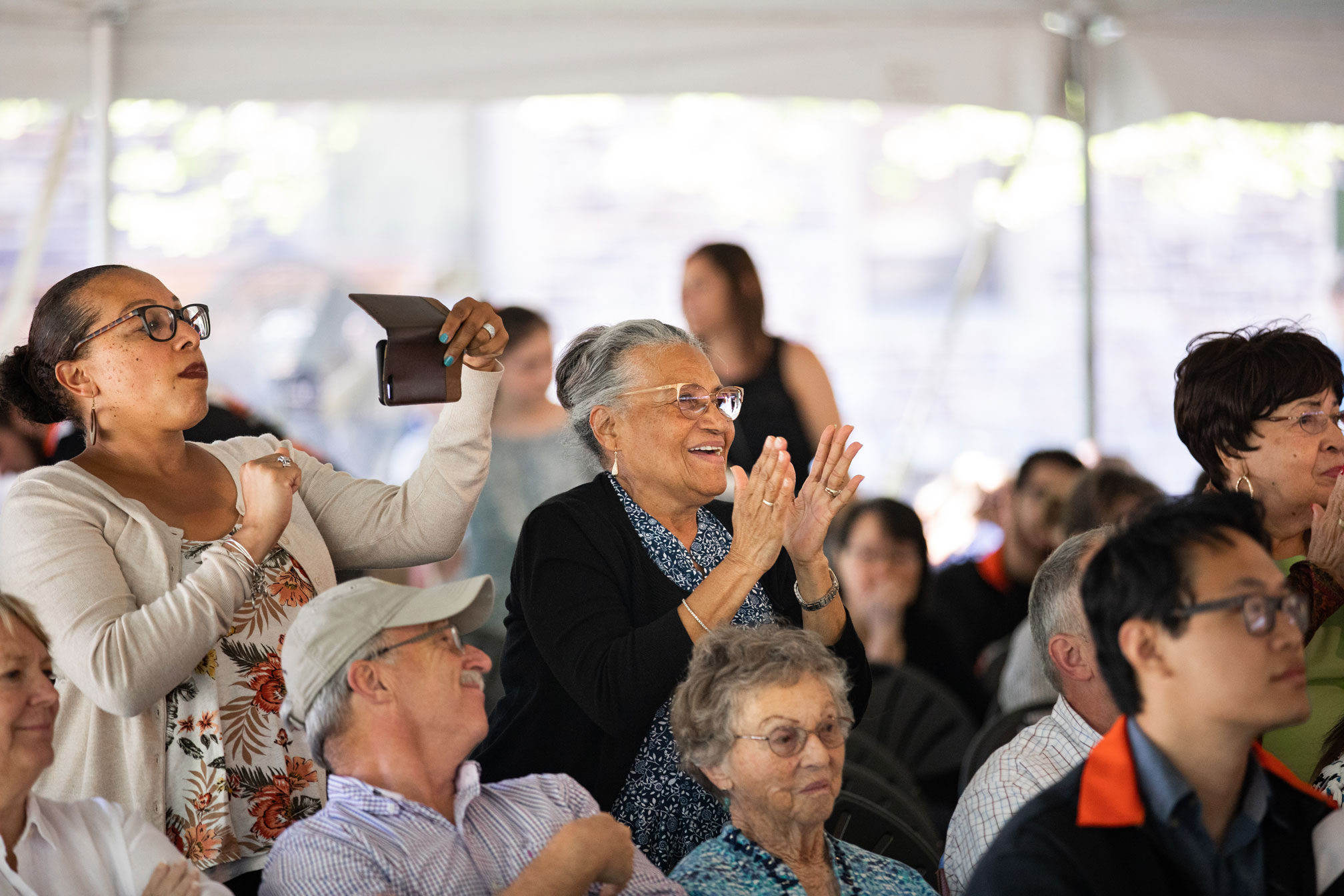 A civil and environmental engineering major with certificates in technology and society, in architecture and engineering, and in entrepreneurship, Lin has been president of the Princeton Energy Association, which brings together students interested in energy technology, policy, and business. She worked with the Princeton Office of Sustainability to lead their Greening Dorms and Greening Events projects. Lin also participated in a project led by Professor Sigrid Adriaenssens on rammed-earth construction, an ancient and sustainable building technique. For her senior thesis, she developed sensors and software to help students reduce energy use in dorm rooms. Lin, of Edison, NJ, will work at Bain & Company.

A computer science major, Opeyemi served as a steering committee member for Men’s Allied Voices for a Respectful & Inclusive Community Project, mentorship chair of the Princeton African Students Association, and a student-athlete wellness leader. A four-year varsity soccer player, he also participated in Profound Ivy, the University’s minority student athlete mentorship program. Opeyemi is a recipient of the Spirit of Princeton Award, which honors students for contribution to campus life. His senior project applied game theory to analyze strategies used by students pursuing banking internships. Opeyemi, of Nazareth, PA, will work as a project manager at Uber.

An operations research and financial engineering major, Brown is a four-year member of the women’s golf team, during which time the team has won two Ivy League championships. Coach Erika DeSanty said Brown, who served as co-captain, was “one of the most influential forces behind the quality of the Princeton golf experience.” For her senior thesis, she designed optimal learning and control strategies for diabetes patients to administer insulin over the course of a day. Brown, of Trabuco Canyon, CA, will pursue a masters degree in management science and engineering at Stanford University.

A mechanical and aerospace engineering major with a certificate in robotics and intelligent systems, Véronneau led the men’s hockey team in his junior year with 17 goals and 38 assists. He was an Academic All-Ivy, a second-team All American, and a first-team All Ivy. On March 14, he made his professional debut with the Ottawa Senators of the National Hockey League. His senior project, done jointly with Spencer Kryczka, Connor Roettig and Josh Teves, integrated a combustion engine and battery power on a golf cart. Véronneau, of Ottawa, Ontario, will play right wing for the Senators.

A geosciences major, Geyman’s thesis on shallow ocean carbonates required her to conduct field work in the Bahamas and Australia and then perform months of lab work with a mass spectrometer, particle size analyzer, and an infrared spectroscope. She developed novel methods such as measuring water depth from pixel color and echo-sounder returns. Faculty members described her work as sophisticated and inventive and compared it to a Ph.D. dissertation. Geyman, of Seattle, WA, will conduct fieldwork in Namibia, the Yukon and the Northwest Territories. In the fall, she will begin a Sachs Global Scholarship to study glaciers at Svalbard, Norway.

A civil and environmental engineering major with a certificate in engineering and management systems, Hallee used machine learning techniques to streamline the detection of cracks in masonry structures. Crack detection, which can alert engineers to structural problems, is critical but both costly and time consuming. Hallee developed a neural network to analyze photos in order to detect cracks in masonry structures. The system proved highly accurate in both the lab and the real world. Hallee, of East Hampton, CT, will work as an engineer at the Kiewit Corporation.

An electrical engineering major with a certificate in applications of computing, Wan was the first to define and evaluate a new class of attacks against the Tor anonymous computing system, which is designed to protect users’ privacy. Wan developed a defense against the attacks and demonstrated when the defense would succeed and when it would not. Wan’s research is the basis of a report, along with advisor Professor Prateek Mittal, at a major privacy research conference in Stockholm. Wan, of Vienna, VA, will pursue a doctorate in computer science and engineering at Stanford University.

A mechanical and aerospace engineering major, Merchant was chief engineer of Princeton Racing Electric, a student team that develops and races high-performance electric vehicles. He also was chief engineer of the Princeton Rocketry Club’s Spaceshot Team, which has attempted to reach the boundary of outer space 100 kilometers above the earth. He drew on summer experiences at Tesla and SpaceX to design and build a two-stage rocket. His rocket design was also the subject of his senior thesis. His advisor, Professor Luigi Martinelli, said that it was the smallest rocket that has been built capable of reaching outer space. Merchant, of Branchburg, NJ, will travel and then attend graduate school.

An electrical engineering major with certificates in applications of computing and in robotics and intelligent systems, Russell worked on applications of photonic neural architecture to optical cryptography. For his thesis, he developed real-time encryption at arbitrarily high speeds. He was president of Princeton Autonomous Vehicle Engineering and chapter team leader of the Princeton Hyperloop team and led the electrical subsystem group in a multi-university collaboration. He also played saxophone in the Princeton University Rock Ensemble. Russell, of Riverside, CT, will work as a business analyst at McKinsey & Company.

A chemical and biological engineering major with certificates in applications of computing and in applied and computational mathematics, de Jong is the recipient of the Shapiro Prize for Academic Excellence and has been inducted into Phi Beta Kappa and Tau Beta Pi. For her thesis investigating how suspended colloidal particles pass through a porous medium, she developed a mathematical model of colloidal transport. She served as a course assistant in the math department and was principal bassoonist in the University Orchestra and vice president of the Cycling Club. De Jong, of Colleyville, TX, will pursue at Ph.D. in mechanical engineering at the California Institute of Technology.

An operations research and financial engineering major with certificates in applications of computing and in finance, Zhu is the recipient of the Shapiro Prize for Academic Excellence and has been inducted into Phi Beta Kappa and Tau Beta Pi. His senior thesis examined popular financial securities in an environment of low interest rates and low rate volatility. The work improved commonly used models that have performed poorly in current conditions. His advisor, Professor Ronnie Sircar, said Zhu developed a sophisticated model at the graduate level of complex mathematics. Zhu was the director of the Princeton Corporate Finance Club and treasurer of Princeton Acapellago, an a cappella group. Zhu, of Overland Park, KS, will work as an analyst at Morgan Stanley.